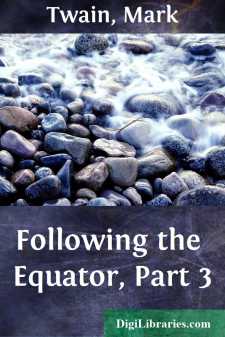 It is by the goodness of God that in our country we have those three unspeakably precious things: freedom of speech, freedom of conscience, and the prudence never to practice either of them.

Mr. G. called. I had not seen him since Nauheim, Germany--several years ago; the time that the cholera broke out at Hamburg. We talked of the people we had known there, or had casually met; and G. said:

"Do you remember my introducing you to an earl--the Earl of C.?"

"Yes. That was the last time I saw you. You and he were in a carriage, just starting--belated--for the train. I remember it."

"I remember it too, because of a thing which happened then which I was not looking for. He had told me a while before, about a remarkable and interesting Californian whom he had met and who was a friend of yours, and said that if he should ever meet you he would ask you for some particulars about that Californian. The subject was not mentioned that day at Nauheim, for we were hurrying away, and there was no time; but the thing that surprised me was this: when I induced you, you said, 'I am glad to meet your lordship gain.' The I again' was the surprise. He is a little hard of hearing, and didn't catch that word, and I thought you hadn't intended that he should. As we drove off I had only time to say, 'Why, what do you know about him?' and I understood you to say, 'Oh, nothing, except that he is the quickest judge of----' Then we were gone, and I didn't get the rest. I wondered what it was that he was such a quick judge of. I have thought of it many times since, and still wondered what it could be. He and I talked it over, but could not guess it out. He thought it must be fox-hounds or horses, for he is a good judge of those--no one is a better. But you couldn't know that, because you didn't know him; you had mistaken him for some one else; it must be that, he said, because he knew you had never met him before. And of course you hadn't had you?"

"How curious that is. Why, he hadn't the least recollection of it. Had you any conversation with him?"

"Well, it left not the least impression upon him. What did you talk about?"

"About the fox. I think that was all."

"Why, that would interest him; that ought to have left an impression. What did he talk about?"

It's very curious. I don't understand it. Did what he said leave an impression upon you?"

"Yes. It showed me that he was a quick judge of--however, I will tell you all about it, then you will understand. It was a quarter of a century ago 1873 or '74. I had an American friend in London named F., who was fond of hunting, and his friends the Blanks invited him and me to come out to a hunt and be their guests at their country place. In the morning the mounts were provided, but when I saw the horses I changed my mind and asked permission to walk. I had never seen an English hunter before, and it seemed to me that I could hunt a fox safer on the ground. I had always been diffident about horses, anyway, even those of the common altitudes, and I did not feel competent to hunt on a horse that went on stilts....