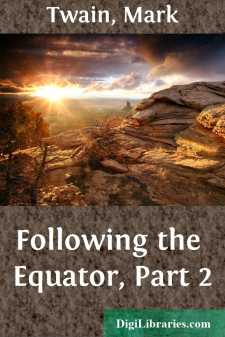 It is your human environment that makes climate.

That note recalls an experience. The passengers were sent for, to come up in the bow and see a fine sight. It was very dark. One could not follow with the eye the surface of the sea more than fifty yards in any direction it dimmed away and became lost to sight at about that distance from us. But if you patiently gazed into the darkness a little while, there was a sure reward for you. Presently, a quarter of a mile away you would see a blinding splash or explosion of light on the water—a flash so sudden and so astonishingly brilliant that it would make you catch your breath; then that blotch of light would instantly extend itself and take the corkscrew shape and imposing length of the fabled sea-serpent, with every curve of its body and the "break" spreading away from its head, and the wake following behind its tail clothed in a fierce splendor of living fire. And my, but it was coming at a lightning gait! Almost before you could think, this monster of light, fifty feet long, would go flaming and storming by, and suddenly disappear. And out in the distance whence he came you would see another flash; and another and another and another, and see them turn into sea-serpents on the instant; and once sixteen flashed up at the same time and came tearing towards us, a swarm of wiggling curves, a moving conflagration, a vision of bewildering beauty, a spectacle of fire and energy whose equal the most of those people will not see again until after they are dead.

It was porpoises—porpoises aglow with phosphorescent light. They presently collected in a wild and magnificent jumble under the bows, and there they played for an hour, leaping and frollicking and carrying on, turning summersaults in front of the stem or across it and never getting hit, never making a miscalculation, though the stem missed them only about an inch, as a rule. They were porpoises of the ordinary length—eight or ten feet—but every twist of their bodies sent a long procession of united and glowing curves astern. That fiery jumble was an enchanting thing to look at, and we stayed out the performance; one cannot have such a show as that twice in a lifetime. The porpoise is the kitten of the sea; he never has a serious thought, he cares for nothing but fun and play. But I think I never saw him at his winsomest until that night. It was near a center of civilization, and he could have been drinking.

By and by, when we had approached to somewhere within thirty miles of Sydney Heads the great electric light that is posted on one of those lofty ramparts began to show, and in time the little spark grew to a great sun and pierced the firmament of darkness with a far-reaching sword of light.

Sydney Harbor is shut in behind a precipice that extends some miles like a wall, and exhibits no break to the ignorant stranger. It has a break in the middle, but it makes so little show that even Captain Cook sailed by it without seeing it....