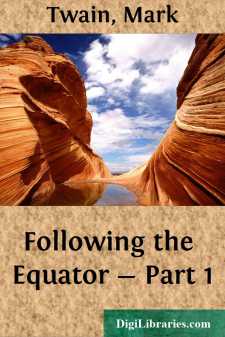 A man may have no bad habits and have worse.

The starting point of this lecturing-trip around the world was Paris, where we had been living a year or two.

We sailed for America, and there made certain preparations. This took but little time. Two members of my family elected to go with me. Also a carbuncle. The dictionary says a carbuncle is a kind of jewel. Humor is out of place in a dictionary.

We started westward from New York in midsummer, with Major Pond to manage the platform-business as far as the Pacific. It was warm work, all the way, and the last fortnight of it was suffocatingly smoky, for in Oregon and Columbia the forest fires were raging. We had an added week of smoke at the seaboard, where we were obliged awhile for our ship. She had been getting herself ashore in the smoke, and she had to be docked and repaired.

We sailed at last; and so ended a snail-paced march across the continent, which had lasted forty days.

We moved westward about mid-afternoon over a rippled and summer sea; an enticing sea, a clean and cool sea, and apparently a welcome sea to all on board; it certainly was to the distressful dustings and smokings and swelterings of the past weeks. The voyage would furnish a three-weeks holiday, with hardly a break in it. We had the whole Pacific Ocean in front of us, with nothing to do but do nothing and be comfortable. The city of Victoria was twinkling dim in the deep heart of her smoke-cloud, and getting ready to vanish and now we closed the field-glasses and sat down on our steamer chairs contented and at peace. But they went to wreck and ruin under us and brought us to shame before all the passengers. They had been furnished by the largest furniture-dealing house in Victoria, and were worth a couple of farthings a dozen, though they had cost us the price of honest chairs. In the Pacific and Indian Oceans one must still bring his own deck-chair on board or go without, just as in the old forgotten Atlantic times—those Dark Ages of sea travel.

Ours was a reasonably comfortable ship, with the customary sea-going fare—plenty of good food furnished by the Deity and cooked by the devil. The discipline observable on board was perhaps as good as it is anywhere in the Pacific and Indian Oceans. The ship was not very well arranged for tropical service; but that is nothing, for this is the rule for ships which ply in the tropics. She had an over-supply of cockroaches, but this is also the rule with ships doing business in the summer seas—at least such as have been long in service. Our young captain was a very handsome man, tall and perfectly formed, the very figure to show up a smart uniform's best effects. He was a man of the best intentions and was polite and courteous even to courtliness. There was a soft and finish about his manners which made whatever place he happened to be in seem for the moment a drawing room. He avoided the smoking room. He had no vices. He did not smoke or chew tobacco or take snuff; he did not swear, or use slang or rude, or coarse, or indelicate language, or make puns, or tell anecdotes, or laugh intemperately, or raise his voice above the moderate pitch enjoined by the canons of good form....