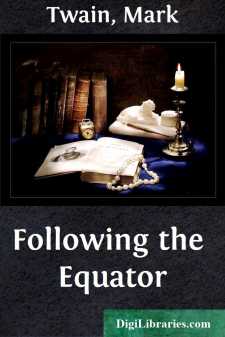 On the seventh day out we saw a dim vast bulk standing up out of the wastes of the Pacific and knew that that spectral promontory was Diamond Head, a piece of this world which I had not seen before for twenty-nine years. So we were nearing Honolulu, the capital city of the Sandwich Islands—those islands which to me were Paradise; a Paradise which I had been longing all those years to see again. Not any other thing in the world could have stirred me as the sight of that great rock did.

In the night we anchored a mile from shore. Through my port I could see the twinkling lights of Honolulu and the dark bulk of the mountain-range that stretched away right and left. I could not make out the beautiful Nuuana valley, but I knew where it lay, and remembered how it used to look in the old times. We used to ride up it on horseback in those days—we young people—and branch off and gather bones in a sandy region where one of the first Kamehameha's battles was fought. He was a remarkable man, for a king; and he was also a remarkable man for a savage. He was a mere kinglet and of little or no consequence at the time of Captain Cook's arrival in 1788; but about four years afterward he conceived the idea of enlarging his sphere of influence. That is a courteous modern phrase which means robbing your neighbor—for your neighbor's benefit; and the great theater of its benevolences is Africa. Kamehameha went to war, and in the course of ten years he whipped out all the other kings and made himself master of every one of the nine or ten islands that form the group. But he did more than that. He bought ships, freighted them with sandal wood and other native products, and sent them as far as South America and China; he sold to his savages the foreign stuffs and tools and utensils which came back in these ships, and started the march of civilization. It is doubtful if the match to this extraordinary thing is to be found in the history of any other savage. Savages are eager to learn from the white man any new way to kill each other, but it is not their habit to seize with avidity and apply with energy the larger and nobler ideas which he offers them. The details of Kamehameha's history show that he was always hospitably ready to examine the white man's ideas, and that he exercised a tidy discrimination in making his selections from the samples placed on view.

A shrewder discrimination than was exhibited by his son and successor, Liholiho, I think. Liholiho could have qualified as a reformer, perhaps, but as a king he was a mistake. A mistake because he tried to be both king and reformer. This is mixing fire and gunpowder together. A king has no proper business with reforming. His best policy is to keep things as they are; and if he can't do that, he ought to try to make them worse than they are. This is not guesswork; I have thought over this matter a good deal, so that if I should ever have a chance to become a king I would know how to conduct the business in the best way.

When Liholiho succeeded his father he found himself possessed of an equipment of royal tools and safeguards which a wiser king would have known how to husband, and judiciously employ, and make profitable. The entire country was under the one scepter, and his was that scepter. There was an Established Church, and he was the head of it. There was a Standing Army, and he was the head of that; an Army of 114 privates under command of 27 Generals and a Field Marshal. There was a proud and ancient Hereditary Nobility....