Folkways A Study of the Sociological Importance of Usages, Manners, Customs, Mores, and Morals 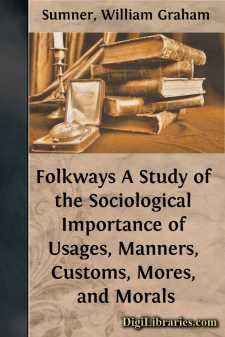 In 1899 I began to write out a text-book of sociology from material which I had used in lectures during the previous ten or fifteen years. At a certain point in that undertaking I found that I wanted to introduce my own treatment of the "mores." I could not refer to it anywhere in print, and I could not do justice to it in a chapter of another book. I therefore turned aside to write a treatise on the "Folkways," which I now offer. For definitions of "folkways" and "mores" see secs. 1, 2, 34, 39, 43, and 66. I formed the word "folkways" on the analogy of words already in use in sociology. I also took up again the Latin word "mores" as the best I could find for my purpose. I mean by it the popular usages and traditions, when they include a judgment that they are conducive to societal welfare, and when they exert a coercion on the individual to conform to them, although they are not coördinated by any authority (cf. sec. 42). I have also tried to bring the word "Ethos" into familiarity again (secs. 76, 79). "Ethica," or "Ethology," or "The Mores" seemed good titles for the book (secs. 42, 43), but Ethics is already employed otherwise, and the other words were very unfamiliar. Perhaps "folkways" is not less unfamiliar, but its meaning is more obvious. I must add that if any one is liable to be shocked by any folkways, he ought not to read about folkways at all. "Nature her custom holds, let shame say what it will" (Hamlet, IV, 7, ad fin.). I have tried to treat all folkways, including those which are most opposite to our own, with truthfulness, but with dignity and due respect to our own conventions.

Chapter I contains elaborate definitions and expositions of the folkways and the mores, with an analysis of their play in human society. Chapter II shows the bearing of the folkways on human interests, and the way in which they act or are acted on. The thesis which is expounded in these two chapters is: that the folkways are habits of the individual and customs of the society which arise from efforts to satisfy needs; they are intertwined with goblinism and demonism and primitive notions of luck (sec. 6), and so they win traditional authority. Then they become regulative for succeeding generations and take on the character of a social force. They arise no one knows whence or how. They grow as if by the play of internal life energy. They can be modified, but only to a limited extent, by the purposeful efforts of men. In time they lose power, decline, and die, or are transformed. While they are in vigor they very largely control individual and social undertakings, and they produce and nourish ideas of world philosophy and life policy. Yet they are not organic or material. They belong to a superorganic system of relations, conventions, and institutional arrangements. The study of them is called for by their social character, by virtue of which they are leading factors in the science of society.

When the analysis of the folkways has been concluded it is necessary that it should be justified by a series of illustrations, or by a setting forth of cases in which the operation of the mores is shown to be what is affirmed in the analysis....