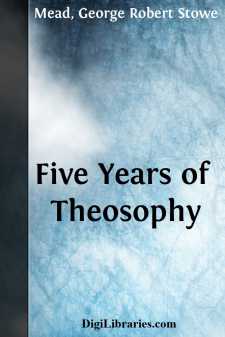 "And Enoch walked with the Elohim, and the Elohim took him."—Genesis

[The curious information-for whatsoever else the world may think of it, it will doubtless be acknowledged to be that—contained in the article that follows, merits a few words of introduction. The details given in it on the subject of what has always been considered as one of the darkest and most strictly guarded of the mysteries of the initiation into occultism—from the days of the Rishis until those of the Theosophical Society—came to the knowledge of the author in a way that would seem to the ordinary run of Europeans strange and supernatural. He himself, however, we may assure the reader, is a most thorough disbeliever in the Supernatural, though he has learned too much to limit the capabilities of the natural as some do. Further, he has to make the following confession of his own belief. It will be apparent, from a careful perusal of the facts, that if the matter be really as stated therein, the author cannot himself be an adept of high grade, as the article in such a case would never have been written. Nor does he pretend to be one. He is, or rather was, for a few years an humble Chela. Hence, the converse must consequently be also true, that as regards the higher stages of the mystery he can have no personal experience, but speaks of it only as a close observer left to his own surmises—and no more. He may, therefore, boldly state that during, and notwithstanding, his unfortunately rather too short stay with some adepts, he has by actual experiment and observation verified some of the less transcendental or incipient parts of the "Course." And, though it will be impossible for him to give positive testimony as to what lies beyond, he may yet mention that all his own course of study, training and experience, long, severe and dangerous as it has often been, leads him to the conviction that everything is really as stated, save some details purposely veiled. For causes which cannot be explained to the public, he himself may he unable or unwilling to use the secret he has gained access to. Still he is permitted by one to whom all his reverential affection and gratitude are due—his last guru—to divulge for the benefit of Science and Man, and specially for the good of those who are courageous enough to personally make the experiment, the following astounding particulars of the occult methods for prolonging life to a period far beyond the common.—G.M.]

Probably one of the first considerations which move the worldly-minded at present to solicit initiation into Theosophy is the belief, or hope, that, immediately on joining, some extraordinary advantage over the rest of mankind will be conferred upon the candidate. Some even think that the ultimate result of their initiation will perhaps be exemption from that dissolution which is called the common lot of mankind....