Five Thousand Miles Underground Or, the Mystery of the Centre of the Earth 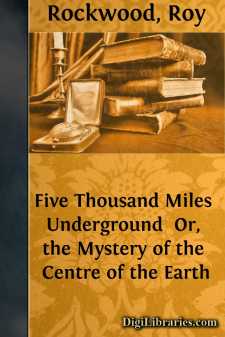 THEY managed to make a good meal of the food supplies they had brought along, and as a dessert Washington made some peach short-cake from the slices of the giant fruit they had found, the day before. Just as they finished supper it got very dark, but, in about an hour, the moon-beams, as the travelers called them, came up, and illuminated the lake with a weird light.

As the machinery of the Mermaid was now in working order there was no further alarm because of the darkness. The ship rested on a level keel about a hundred yards back from the lake, and, seeing that all was snug, and the fastenings secure, the travelers went to bed.

Though they had to forego fish for breakfast the travelers made a good meal. After seeing that the ship was in readiness for a quick start, the professor suggested they take a walk around and see what sort of country they might be in now.

They tramped on for several miles, meeting with no adventures, and seeing nothing out of the ordinary. It was a pleasant day, just warm enough to be comfortable, and a little wind was blowing through the trees.

"It would be almost like home if it wasn't for the strange lights, and the memory of the queer things here," said Jack. "I feel fine. Let's see if you can hit that dead tree over there, Mark."

Jack stooped to grab up a stone, but no sooner had his fingers touched it than he called out:

"There! I forgot all about the stones here being heavier than lead. Guess we can't throw any of 'em. But come on. I'll race you to the dead tree!"

Mark was willing, so the two boys set off at a fast pace.

"Look out where you're going!" the professor called after them. "No telling what may be in those woods," for the boys were approaching a little glade, on the edge of which the dead tree stood.

Jack reached the goal first, and stood leaning against the trunk, waiting for Mark.

Mark was about to excuse himself for his poor showing, on the plea of having eaten too much breakfast, when to his horror he saw what seemed to be a long thin snake spring out from the branches of a nearby tree and twine itself about Jack.

"Help me! Save me!" cried the unfortunate boy, as he was lifted high into the air and pulled within the shadow of the wood.

For an instant Mark was too horror-stricken to move. Then with a shout that alarmed the others, who were coming along more slowly, he made a dash for the place he had last seen Jack.

Had old Andy not been on the watch, with those keen eyes of his, there might have been a double tragedy. He had seen from afar the sudden snatching up of Jack, and noted Mark's rush to save his chum.

"Stand still! Don't go in there for your life!" yelled the hunter, at the same time running forward with gun ready.

His example was followed by the professor, Washington and the other two men.

"A snake has Jack!" called Mark, when Andy was at his side.