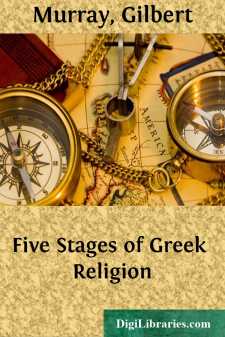 Many persons who are quite prepared to admit the importance to the world of Greek poetry, Greek art, and Greek philosophy, may still feel it rather a paradox to be told that Greek religion specially repays our study at the present day. Greek religion, associated with a romantic, trivial, and not very edifying mythology, has generally seemed one of the weakest spots in the armour of those giants of the old world. Yet I will venture to make for Greek religion almost as great a claim as for the thought and the literature, not only because the whole mass of it is shot through by those strange lights of feeling and imagination, and the details of it constantly wrought into beauty by that instinctive sense of artistic form, which we specially associate with Classical Greece, but also for two definite historical reasons. In the first place, the student of that dark and fascinating department of the human mind which we may call Religious Origins, will find in Greece an extraordinary mass of material belonging to a very early date. For detail and variety the primitive Greek evidence has no equal. And, secondly, in this department as in others, ancient Greece has the triumphant if tragic distinction of beginning at the very bottom and struggling, however precariously, to the very summits. There is hardly any horror of primitive superstition of which we cannot find some distant traces in our Greek record. There is hardly any height of spiritual thought attained in the world that has not its archetype or its echo in the stretch of Greek literature that lies between Thales and Plotinus, embracing much of the 'Wisdom-Teachers' and of St. Paul.

The progress of Greek religion falls naturally into three stages, all of them historically important. First there is the primitive Euetheia or Age of Ignorance, before Zeus came to trouble men's minds, a stage to which our anthropologists and explorers have found parallels in every part of the world. Dr. Preuss applies to it the charming word 'Urdummheit', or 'Primal Stupidity'. In some ways characteristically Greek, in others it is so typical of similar stages of thought elsewhere that one is tempted to regard it as the normal beginning of all religion, or almost as the normal raw material out of which religion is made. There is certainly some repulsiveness, but I confess that to me there is also an element of fascination in the study of these 'Beastly Devices of the Heathen', at any rate as they appear in early Greece, where each single 'beastly device' as it passes is somehow touched with beauty and transformed by some spirit of upward striving.

Secondly there is the Olympian or classical stage, a stage in which, for good or ill, blunderingly or successfully, this primitive vagueness was reduced to a kind of order. This is the stage of the great Olympian gods, who dominated art and poetry, ruled the imagination of Rome, and extended a kind of romantic dominion even over the Middle Ages. It is the stage that we learn, or mis-learn, from the statues and the handbooks of mythology....