"Five-Head" Creek; and Fish Drugging In The Pacific 1901 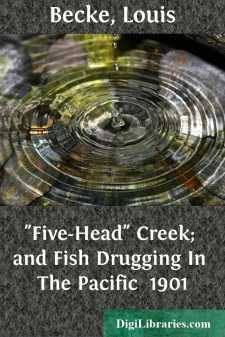 I had ridden all day through an endless vista ot ghostly grey gums and ironbarks, when I came in sight of the long wavering line of vivid green foliage which showed me that I had reached my destination—a roughly-built slab hut with a roof of corrugated iron. This place was to be my home for six months, and stood on the bank of Five-Head Creek, twenty-five miles from the rising city of Townsville in North Queensland.

Riding up to the building, I got off my wearied, sweating horse, and, removing the saddle and my blanket and other impediments, led him to the creek to drink, and then hobbled and turned him loose to feed on the soft lush grass and reeds growing along the margin of the water. Then I entered the empty house, made a brief examination of it, and wondered how my mate would like living in such an apparently comfortless abode.

I must mention that I had come from Townsville to take charge of Five-Head Creek cattle run, which had suffered so severely from a terrible drought that it had been temporarily abandoned. We were to look after and repair the fencing, many miles' length of which had been destroyed by fire or succumbed to white ants, to search for and collect the remnant of the cattle that had not perished in the drought, and see after the place generally. My mate was to follow me out in a few days with a dray-load of stores.

I lit a fire, boiled a billy of tea, and ate some cold beef and damper. Then, as the sun dipped below a range of low hills to the westward, I filled my pipe, and, walking down to the bank of the creek, surveyed my environs.

"What a God-forsaken-looking country!" I thought as I gazed around me; and, indeed, the prospect was anything but inviting. On both sides of the creek the soil showed evidences of the severity of the past drought. Great gaping fissures—usun cracks we called them—traversed and zig-zagged the hot, parching ground, on which not a blade of grass was to be seen. Here and there, amid the grey-barked ghostly gums, were oases of green—thickets of stunted sandalwood whose evergreen leaves defied alike the torrid summer heat and the black frosts of winter months; but underneath them lay the shrivelled carcasses and whitening bones of hundreds of cattle which had perished of starvation—too weak even to totter down to die, bogged in the banks of the creek. As I sat and smoked a strong feeling of depression took possession of me; I already began to hate the place, and regretted I could not withdraw from my engagement.

Yet in less than a week I began to like it, and when I left it I did so with some regret, for I had made friends with sweet Mother Nature, whose loving-kindness is with us always in wild places, though we may not know it at first, and take no heed of her many calls and silent beckonings to us to come and love, and rest and dream, and be content upon her tender, mighty bosom.

My horse, cropping eagerly at the soft grass and salty pigweed, suddenly raised his head and pricked up his ears. He had heard something and was listening, and looking across to the opposite bank I saw a sight that lifted me out of my sudden fit of depression and then filled me with delight.

Two stately emus were walking along in single file, the male bird leading, holding his head erect, and marching like the drum-major of a regiment of Guards. On the margin of the bank they halted and looked at the horse, which now stood facing them; a minute's scrutiny satisfied both parties that there was nothing to fear from each other, and then the great birds walked down the bank to a broad dry patch of bright yellow sand, which stretched halfway across the bed of the creek....