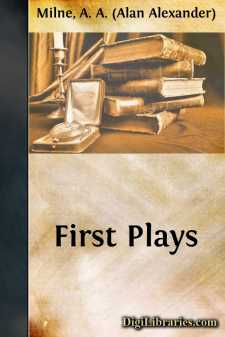 These five plays were written, in the order in which they appear now, during the years 1916 and 1917. They would hardly have been written had it not been for the war, although only one of them is concerned with that subject. To his other responsibilities the Kaiser now adds this volume.

For these plays were not the work of a professional writer, but the recreation of a (temporary) professional soldier. Play-writing is a luxury to a journalist, as insidious as golf and much more expensive in time and money. When an article is written, the financial reward (and we may as well live as not) is a matter of certainty. A novelist, too, even if he is not in "the front rank"—but I never heard of one who wasn't—can at least be sure of publication. But when a play is written, there is no certainty of anything save disillusionment.

To write a play, then, while I was a journalist seemed to me a depraved proceeding, almost as bad as going to Lord's in the morning. I thought I could write one (we all think we can), but I could not afford so unpromising a gamble. But once in the Army the case was altered. No duty now urged me to write. My job was soldiering, and my spare time was my own affair. Other subalterns played bridge and golf; that was one way of amusing oneself. Another way was—why not?—to write plays.

So we began with Wurzel-Flummery. I say "we," because another is mixed up in this business even more seriously than the Kaiser. She wrote; I dictated. And if a particularly fine evening drew us out for a walk along the byways—where there was no saluting, and one could smoke a pipe without shocking the Duke of Cambridge—then it was to discuss the last scene and to wonder what would happen in the next. We did not estimate the money or publicity which might come from this new venture; there has never been any serious thought of making money by my bridge-playing, nor desire for publicity when I am trying to play golf. But secretly, of course, we hoped. It was that which made it so much more exciting than any other game.

Our hopes were realized to the following extent:

Wurzel-Flummery was produced by Mr. Dion Boucicault at the New Theatre in April, 1917. It was originally written in three acts, in which form it was shown to one or two managers. At the beginning of 1917 I was offered the chance of production in a triple bill if I cut it down into a two-act play. To cut even a line is painful, but to cut thirty pages of one's first comedy, slaughtering whole characters on the way, has at least a certain morbid fascination. It appeared, therefore, in two acts; and one kindly critic embarrassed us by saying that a lesser artist would have written it in three acts, and most of the other critics annoyed us by saying that a greater artist would have written it in one act. However, I amused myself some months later by slaying another character—the office-boy, no less—thereby getting it down to one act, and was surprised to find that the one-act version was, after all, the best......