First Book of Adam and Eve 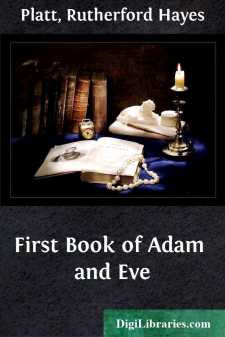 The First Book of Adam and Eve details the life and times of Adam and Eve after they were expelled from the garden to the time that Cain kills his brother Abel. It tells of Adam and Eve's first dwelling—the Cave of Treasures; their trials and temptations; Satan's many apparitions to them; the birth of Cain, Abel, and their twin sisters; and Cain's love for his beautiful twin sister, Luluwa, whom Adam and Eve wished to join to Abel.

This book is considered by many scholars to be part of the "Pseudepigrapha" (soo-duh-pig-ruh-fuh). The "Pseudepigrapha" is a collection of historical biblical works that are considered to be fiction. Because of that stigma, this book was not included in the compilation of the Holy Bible. This book is a written history of what happened in the days of Adam and Eve after they were cast out of the garden. Although considered to be pseudepigraphic by some, it carries significant meaning and insight into events of that time. It is doubtful that these writings could have survived all the many centuries if there were no substance to them.

This book is simply a version of an account handed down by word of mouth, from generation to generation, linking the time that the first human life was created to the time when somebody finally decided to write it down. This particular version is the work of unknown Egyptians. The lack of historical allusion makes it difficult to precisely date the writing, however, using other pseudepigraphical works as a reference, it was probably written a few hundred years before the birth of Christ. Parts of this version are found in the Jewish Talmud, and the Islamic Koran, showing what a vital role it played in the original literature of human wisdom. The Egyptian author wrote in Arabic, but later translations were found written in Ethiopic. The present English translation was translated in the late 1800's by Dr. S. C. Malan and Dr. E. Trumpp. They translated into King James English from both the Arabic version and the Ethiopic version which was then published in The Forgotten Books of Eden in 1927 by The World Publishing Company. In 1995, the text was extracted from a copy of The Forgotten Books of Eden and converted to electronic form by Dennis Hawkins. It was then translated into more modern English by simply exchanging 'Thou' s for 'You's, 'Art's for 'Are's, and so forth. The text was then carefully re-read to ensure its integrity.

Chapter I - The crystal sea, God commands Adam, expelled from Eden, to live in the Cave of Treasures.

1 On the third day, God planted the garden in the east of the earth, on the border of the world eastward, beyond which, towards the sun-rising, one finds nothing but water, that encompasses the whole world, and reaches to the borders of heaven.

2 And to the north of the garden there is a sea of water, clear and pure to the taste, unlike anything else; so that, through the clearness thereof, one may look into the depths of the earth.

3 And when a man washes himself in it, he becomes clean of the cleanness thereof, and white of its whiteness—even if he were dark....