Fire Worship (From "Mosses from an Old Manse") 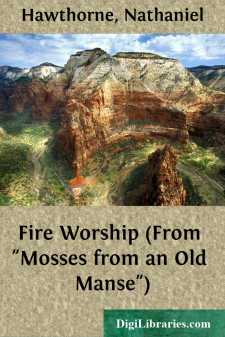 It is a great revolution in social and domestic life, and no less so in the life of a secluded student, this almost universal exchange of the open fireplace for the cheerless and ungenial stove. On such a morning as now lowers around our old gray parsonage, I miss the bright face of my ancient friend, who was wont to dance upon the hearth and play the part of more familiar sunshine. It is sad to turn from the cloudy sky and sombre landscape; from yonder hill, with its crown of rusty, black pines, the foliage of which is so dismal in the absence of the sun; that bleak pasture-land, and the broken surface of the potato-field, with the brown clods partly concealed by the snowfall of last night; the swollen and sluggish river, with ice-incrusted borders, dragging its bluish-gray stream along the verge of our orchard like a snake half torpid with the cold,—it is sad to turn from an outward scene of so little comfort and find the same sullen influences brooding within the precincts of my study. Where is that brilliant guest, that quick and subtle spirit, whom Prometheus lured from heaven to civilize mankind and cheer them in their wintry desolation; that comfortable inmate, whose smile, during eight months of the year, was our sufficient consolation for summer's lingering advance and early flight? Alas! blindly inhospitable, grudging the food that kept him cheery and mercurial, we have thrust him into an iron prison, and compel him to smoulder away his life on a daily pittance which once would have been too scanty for his breakfast. Without a metaphor, we now make our fire in an air-tight stove, and supply it with some half a dozen sticks of wood between dawn and nightfall.

I never shall be reconciled to this enormity. Truly may it be said that the world looks darker for it. In one way or another, here and there and all around us, the inventions of mankind are fast blotting the picturesque, the poetic, and the beautiful out of human life. The domestic fire was a type of all these attributes, and seemed to bring might and majesty, and wild nature and a spiritual essence, into our in most home, and yet to dwell with us in such friendliness that its mysteries and marvels excited no dismay. The same mild companion that smiled so placidly in our faces was he that comes roaring out of AEtna and rushes madly up the sky like a fiend breaking loose from torment and fighting for a place among the upper angels. He it is, too, that leaps from cloud to cloud amid the crashing thunder-storm. It was he whom the Gheber worshipped with no unnatural idolatry; and it was he who devoured London and Moscow and many another famous city, and who loves to riot through our own dark forests and sweep across our prairies, and to whose ravenous maw, it is said, the universe shall one day be given as a final feast. Meanwhile he is the great artisan and laborer by whose aid men are enabled to build a world within a world, or, at least, to smooth down the rough creation which Nature flung to it. He forges the mighty anchor and every lesser instrument; he drives the steamboat and drags the rail-car; and it was he—this creature of terrible might, and so many-sided utility and all-comprehensive destructiveness—that used to be the cheerful, homely friend of our wintry days, and whom we have made the prisoner of this iron cage.

How kindly he was! and, though the tremendous agent of change, yet bearing himself with such gentleness, so rendering himself a part of all life-long and age-coeval associations, that it seemed as if he were the great conservative of nature. While a man was true to the fireside, so long would he be true to country and law, to the God whom his fathers worshipped, to the wife of his youth, and to all things else which instinct or religion has taught us to consider sacred. With how sweet humility did this elemental spirit perform all needful offices for the household in which he was domesticated! He was equal to the concoction of a grand dinner, yet scorned not to roast a potato or toast a bit of cheese. How humanely did he cherish the school-boy's icy fingers, and thaw the old man's joints with a genial warmth which almost equalled the glow of youth! And how carefully did he dry the cowhide boots that had trudged through mud and snow, and the shaggy outside garment stiff with frozen sleet! taking heed, likewise, to the comfort of the faithful dog who had followed his master through the storm. When did he refuse a coal to light a pipe, or even a part of his own substance to kindle a neighbor's fire? And then, at twilight, when laborer, or scholar, or mortal of whatever age, sex, or degree, drew a chair beside him and looked into his glowing face, how acute, how profound, how comprehensive was his sympathy with the mood of each and all!...