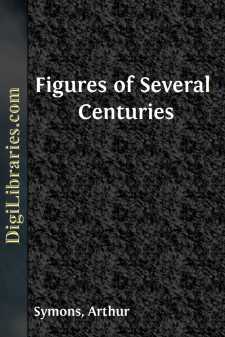 The Confessions of St. Augustine are the first autobiography, and they have this to distinguish them from all other autobiographies, that they are addressed directly to God. Rousseau's unburdening of himself is the last, most effectual manifestation of that nervous, defiant consciousness of other people which haunted him all his life. He felt that all the men and women whom he passed on his way through the world were at watch upon him, and mostly with no very favourable intentions. The exasperation of all those eyes fixed upon him, the absorbing, the protesting self-consciousness which they called forth in him, drove him, in spite of himself, to set about explaining himself to other people, to the world in general. His anxiety to explain, not to justify, himself was after all a kind of cowardice before his own conscience. He felt the silent voices within him too acutely to keep silence. Cellini wrote his autobiography because he heard within him such trumpeting voices of praise, exultation, and the supreme satisfaction of a violent man who has conceived himself to be always in the right, that it shocked him to think of going down into his grave without having made the whole world hear those voices. He hurls at you this book of his own deeds that it may smite you into acquiescent admiration. Casanova, at the end of a long life in which he had tasted all the forbidden fruits of the earth, with a simplicity of pleasure in which the sense of their being forbidden was only the least of their abounding flavours, looked back upon his past self with a slightly pathetic admiration, and set himself to go all over those successful adventures, in love and in other arts, firstly, in order that he might be amused by recalling them, and then because he thought the record would do him credit. He neither intrudes himself as a model, nor acknowledges that he was very often in the wrong. Always passionate after sensations, and for their own sake, the writing of an autobiography was the last, almost active, sensation that was left to him, and he accepted it energetically.

Probably St. Augustine first conceived of the writing of an autobiography as a kind of penance, which might be fruitful also to others. By its form it challenges the slight difficulty that it appears to be telling God what God knew already. But that is the difficulty which every prayer also challenges. To those we love, are we not fond of telling many things about ourselves which they know already? A prayer, such confessions as these, are addressed to God by one of those subterfuges by which it is necessary to approach the unseen and infinite, under at least a disguise of mortality. And the whole book, as no other such book has ever been, is lyrical. This prose, so simple, so familiar, has in it the exaltation of poetry. It can pass, without a change of tone, from the boy's stealing of pears: 'If aught of those pears came within my mouth, what sweetened it was the sin'; to a tender human affection: 'And now he lives in Abraham's bosom: whatever that be which is signified by that bosom, there lives my Nebridius, my sweet friend'; and from that to the saint's rare, last ecstasy: 'And sometimes Thou admittedst me to an affection, very unusual, in my inmost soul, rising to a strange sweetness, which if it were perfected in me, I know not what in it would not belong to the life to come.' And even self-analysis, of which there is so much, becoming at times a kind of mathematics, even those metaphysical subtleties which seem, to sharpen thought upon thought to an almost invisible fineness of edge, become also lyrical, inter-penetrated as they are with this sense of the divine.

To St. Augustine all life is seen only in its relation to the divine; looked at from any other side, it has no meaning, and, looked at even with this light upon it, is but for the most part seen as a blundering in the dark, a wandering from the right path....