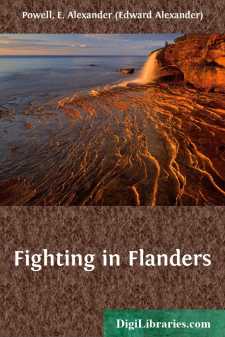 VIII. The Fall Of Antwerp

The bombardment of Antwerp began about ten o'clock on the evening of Wednesday, October 7. The first shell to fall within the city struck a house in the Berchem district, killing a fourteen-year-old boy and wounding his mother and little sister. The second decapitated a street-sweeper as he was running for shelter. Throughout the night the rain of death continued without cessation, the shells falling at the rate of four or five a minute. The streets of the city were as deserted as those of Pompeii. The few people who remained, either because they were willing to take their chances or because they had no means of getting away, were cowering in their cellars. Though the gas and electric lights were out, the sky was rosy from the reflection of the petrol-tanks which the Belgians had set on fire; now and then a shell would burst with the intensity of magnesium, and the quivering beams of two searchlights on the forts across the river still further lit up the ghastly scene. The noise was deafening. The buildings seemed to rock and sway. The very pavements trembled. Mere words are inadequate to give a conception of the horror of it all. There would come the hungry whine of a shell passing low over the house-tops, followed, an instant later, by a shattering crash, and the whole facade of the building that had been struck would topple into the street in a cascade of brick and stone and plaster. It was not until Thursday night, however, that the Germans brought their famous forty-two- centimetre guns into action. The effect of these monster cannon was appalling. So tremendous was the detonation that it sounded as though the German batteries were firing salvoes. The projectiles they were now raining upon the city weighed a ton apiece and had the destructive properties of that much nitroglycerine. We could hear them as they came. They made a roar in the air which sounded at first like an approaching express train, but which rapidly rose in volume until the atmosphere quivered with the howl of a cyclone. Then would come an explosion which jarred the city to its very foundations.

Over the shivering earth rolled great clouds of dust and smoke. When one of these terrible projectiles struck a building it did not merely tear away the upper stories or blow a gaping aperture in its walls: the whole building crumbled, disintegrated, collapsed, as though flattened by a mighty hand. When they exploded in the open street they not only tore a hole in the pavement the size of a cottage cellar, but they sliced away the facades of all the houses in the immediate vicinity, leaving their interiors exposed, like the interiors upon a stage. Compared with the "forty-twos" the shell and shrapnel fire of the first night's bombardment was insignificant and harmless. The thickest masonry was crumpled up like so much cardboard. The stoutest cellars were no protection if a shell struck above them. It seemed as though at times the whole city was coming down about our ears. Before the bombardment had been in progress a dozen hours there was scarcely a street in the southern quarter of the city-- save only the district occupied by wealthy Germans, whose houses remained untouched--which was not obstructed by heaps of fallen masonry....