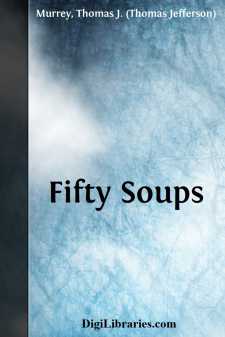 Soups, like salads, present an excellent opportunity for the cook to display good taste and judgment.

The great difficulty lies in selecting the most appropriate soup for each particular occasion; it would be well to first select your bill of fare, after which decide upon the soup.

The season, and force of circumstances, may compel you to decide upon a heavy fish, such as salmon, trout, or other oleaginous fishes, and heavy joints and entrées.

Under these circumstances it must necessarily follow that a light soup should begin the dinner, and vice versa; for large parties, one light and one heavy soup is always in order.

There is as much art in arranging a bill of fare and harmonizing the peculiarities of the various dishes, as there is in preparing the colors for a painting; the soup represents the pivot upon which harmony depends.

Soups may be divided into four classes: clear, thick, purées or bisques, and chowders. A purée is made by rubbing the cooked ingredients through a fine sieve; an ordinary thick soup is made by adding various thickening ingredients to the soup stock; clear soups are, properly speaking, the juices of meats, served in a convenient and appetizing form.

Chowders are quite distinct from the foregoing, being compounds of an infinite variety of fish, flesh, fowl, or vegetables, in proportions to suit the fluctuating ideas of the cook; the object sought is to prepare a thick, highly seasoned compound, without reducing the ingredients to the consistency of a purée.

Soup Stock.—The word stock when used in cooking means the foundation or basis upon which soups and sauces depend; it is therefore the most important part of soup making. Care should be exercised that nothing in the least tainted or decayed enters the stock pot; it is very desirable that soup stock be prepared a day or two before it is wanted; the seasoning should be added in moderation at first, as it is difficult to restore a soup that has been damaged by over seasoning.

Milk or cream should be boiled and strained and added hot when intended for soups; when eggs are used beat them thoroughly, and add while the soup is hot. Should they be added when the soup is boiling, they are very apt to separate, and give the soup the appearance of having curdled; the best plan is to beat up the egg with a little of the warm soup, then add it to the soup gradually.

In summer, soup stock should be boiled from day to day, if kept any length of time, else it may become sour: should this happen, add a piece of charcoal to the soup, boil, cool, and strain into freshly scalded earthen or porcelain-lined ware. On no account allow the soup stock to become cold in an iron pot or saucepan.

To make Beef Stock.—Take six pounds of soup meat, cut it up into good sized pieces, break the bones into small pieces, place them in the stock pot, and add five quarts of cold water and two ounces of salt; boil slowly for five hours, remove the scum as fast as it rises; cut up three white turnips and three carrots, add these to the soup with two stalks of celery, one large onion quartered, six cloves, teaspoonful of whole peppers, and a small bunch of herbs....