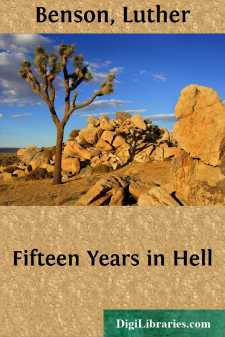 Truth, said Lord Byron, is stranger than fiction. He was right, for so it is. Another has declared that if any man should write a faithful history of his own career, the work would be an interesting one. The question now arises, does any man dare to be sufficiently candid to write such a work? Is there no secret baseness he would hide?--no act which, proper to be told, he would swerve from the truth to tell in his own favor? Undoubtedly, many. Doubtless it is well that few have the resolution or inclination to chronicle their faults and failings. How many, too, would shrink from making a public display of their miserable experiences for fear of being accused of glorying in their past shame, or of parading a pride that apes humility. I pretend to no talent, but if a too true story of suffering may interest, and at the same time alarm, I can promise matter enough, and unembellished, too, for no embellishment is needed, as all my sketches are from the life. The incidents will not be found to be consecutive, but set down as certain scenes occur to my recollection--heedless of order, style, or system. Each is a record of shame, suffering, destitution and disgrace. I have all my life stood without and gazed longingly through gateways which relentlessly barred me from the light and warmth and glory, which, though never for me, was shining beyond. From the day that consciousness came to me in this world I have been miserable. In early childhood I swam, as it were, in a dark sea of sorrow whose sad waves forever beat over me with a prophetic wail of desolations and storms to come. During the years of boyhood, when others were thoughtless and full of joy, the sun's rays were hidden from my sight and I groped hopelessly forward, praying in vain for an end of misery. Out of such a boyhood there came--as what else could come?--a manhood all imperfect, clothed with gloom, haunted by horror, and familiar with undefinable terrors which have weighed upon my heart until I have cried to myself that it would break--until I have almost prayed that it would break and thereby free me from the bondage of my pitiless master, Woe! To-day walled within a prison for madmen, looking from a window whose grating is iron, the sole occupant of a room as blank as the leaf of happiness is to me, I abandon every hope. On this side the silence which we call death--that silence which inhabits the dismal grave, there is for me only sorrow and agony keener than has ever before made gray and old before its time the heart of man. Thirty years! and what are they?--what have they been? Patience, and as best I can, I will unfold their record. Thirty years! and I feel that the weight of a world's wretchedness has lain upon me for thrice their number of terrible days!...