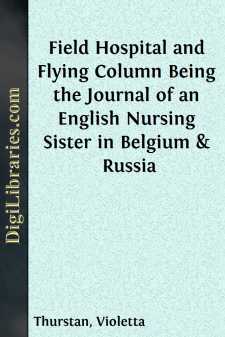 I THE BEGINNING OF IT ALL

War, war, war. For me the beginning of the war was a torchlight tattoo on Salisbury Plain. It was held on one of those breathless evenings in July when the peace of Europe was trembling in the balance, and when most of us had a heartache in case—in case England, at this time of internal crisis, did not rise to the supreme sacrifice.

It was just the night for a tattoo—dark and warm and still. Away across the plain a sea of mist was rolling, cutting us off from the outside world, and only a few pale stars lighted our stage from above.

The field was hung round with Chinese lanterns throwing weird lights and shadows over the mysterious forms of men and beasts that moved therein. It was fascinating to watch the stately entrance into the field, Lancers, Irish Rifles, Welsh Fusiliers, Grenadiers and many another gallant regiment, each marching into the field in turn to the swing of their own particular regimental tune until they were all drawn up in order.

There followed a very fine exhibition of riding and the usual torchlight tricks, and then the supreme moment came. The massed bands had thundered out the first verse of the Evening Hymn, the refrain was taken up by a single silver trumpet far away—a sweet thin almost unearthly note more to be felt than heard—and then the bands gathered up the whole melody and everybody sang the last verse together.

The Last Post followed, and then I think somehow we all knew.

A week later I had a telegram from the Red Cross summoning me to London.

London was a hive of ceaseless activity. Territorials were returning from their unfinished training, every South Coast train was crowded with Naval Reserve men who had been called up, every one was buying kits, getting medical comforts, and living at the Army and Navy Stores. Nurses trained and untrained were besieging the War Office demanding to be sent to the front, Voluntary Aid Detachment members were feverishly practising their bandaging, working parties and ambulance classes were being organized, crowds without beginning and without end were surging up and down the pavements between Westminster and Charing Cross, wearing little flags, buying every half-hour edition of the papers and watching the stream of recruits at St. Martin's. All was excitement—no one knew what was going to happen. Then the bad news began to come through from Belgium, and every one steadied down and settled themselves to their task of waiting or working, whichever it might happen to be.

I was helping at the Red Cross Centre in Vincent Square, and all day long there came an endless procession of women wanting to help, some trained nurses, many—far too many—half-trained women; and a great many raw recruits, some anxious for adventure and clamouring "to go to the front at once," others willing and anxious to do the humblest service that would be of use in this time of crisis.

Surely after this lesson the Bill for the State Registration of Trained Nurses cannot be ignored or held up much longer....