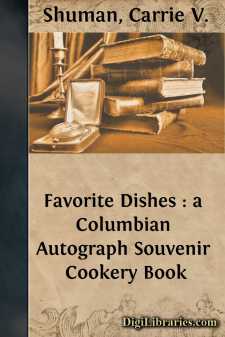 Tastes differ as to which of the many kinds of tea is the best, and yet the general use of English Breakfast and Oolong warrants the recommending of these two teas as standard. The Chinese have taught us the correct idea of tea drinking; to have it always freshly made, with the water boiling, and to steep the leaves at table.

The tea table can be easily equipped now with a boiler in silver or brass, with alcohol lamp underneath; a tea caddy in china or silver, with teapot and cups before the hostess.

No set formula can be prescribed for quantity to each cup, but it averages one-half teaspoon of tea leaves.

Heat teapot by pouring in some hot water, let it stand a few moments and empty in a bowl for hot water on the table. Place tea leaves required in the pot, pour in boiling water, instantly replace the lid and let it steep a few minutes. It is then ready to serve. Use a small amount of sugar and no cream, as both cream and sugar detract from the correct flavor of tea.

For "Five O'clock Tea" a "teaball" is recommended. The teaball is convenient at all times, but especially upon an occasion when guests are coming and going. Keep the water on tea table constantly boiling and the teaball partly filled with tea leaves. A cup of tea can then be brewed quickly by dropping the ball into the cup, pouring boiling water over it, holding it in the cup (slightly moving the teaball around through the water), until the color is satisfactory to the drinker's taste. In this way three or four cups of tea can be served quickly and the flavor of the tea leaves preserved. If agreeable to the taste, a slice of lemon can be added to each cup and a few drops of arrack to make tea à la Russe.

To make good Chocolate is not easy. One's own taste must be the guide regarding strength. Soften and smooth the chocolate with cold water in a jar on the range; pour in boiling water, then add milk, stirring constantly. Serve as soon as it boils. When each cup is filled with the chocolate, place two tablespoons of whipped cream on top.

Cocoa has the same flavor as chocolate, but it is richer and more oily.

When made from the ground it can be prepared at the table, but it is better boiled a short time in water and thinned with hot milk.

Made from the shells it requires a longer boiling. First wet two ounces of the cocoa shells with a little cold water and pour over them one quart of boiling water. Boil for one hour and a half; strain and add one quart of milk, also a few drops of the essence of vanilla.

When it comes to a boil take immediately from the fire and serve.

The standard mixture of coffee is Java and Mocha; two-thirds Java and one-third Mocha, the former giving the strength, the latter the flavor. After roasting it should be kept in an air-tight can. Grind only so much each time as may be required. To one cupful of ground coffee add one beaten egg and four tablespoons of cold water; mix thoroughly in coffee pot and pour in one quart of boiling water....