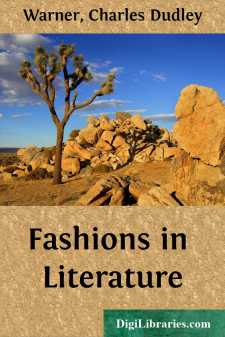 Thirty years ago and more those who read and valued good books in this country made the acquaintance of Mr. Warner, and since the publication of "My Summer In a Garden" no work of his has needed any other introduction than the presence of his name on the title-page; and now that reputation has mellowed into memory, even the word of interpretation seems superfluous. Mr. Warner wrote out of a clear, as well as a full mind, and lucidity of style was part of that harmonious charm of sincerity and urbanity which made him one of the most intelligible and companionable of our writers.

It is a pleasure, however, to recall him as, not long ago, we saw him move and heard him speak in the ripeness of years which brought him the full flavor of maturity without any loss of freshness from his humor or serenity from his thought. He shared with Lowell, Longfellow, and Curtis a harmony of nature and art, a unity of ideal and achievement, which make him a welcome figure, not only for what he said, but for what he was; one of those friends whose coming is hailed with joy because they seem always at their best, and minister to rather than draw upon our own capital of moral vitality.

Mr. Warner was the most undogmatic of idealists, the most winning of teachers. He had always some thing to say to the ethical sense, a word for the conscience; but his approach was always through the mind, and his enforcement of the moral lesson was by suggestion rather than by commandment. There was nothing ascetic about him, no easy solution of the difficulties of life by ignoring or evading them; nor, on the other hand, was there any confusion of moral standards as the result of a confusion of ideas touching the nature and functions of art. He saw clearly, he felt deeply, and he thought straight; hence the rectitude of his mind, the sanity of his spirit, the justice of his dealings with the things which make for life and art. He used the essay as Addison used it, not for sermonic effect, but as a form of art which permitted a man to deal with serious things in a spirit of gayety, and with that lightness of touch which conveys influence without employing force. He was as deeply enamored as George William Curtis with the highest ideals of life for America, and, like Curtis, his expression caught the grace and distinction of those ideals.

It is a pleasure to hear his voice once more, because its very accents suggest the most interesting, high-minded, and captivating ideals of living; he brings with him that air of fine breeding which is diffused by the men who, in mind as in manners, have been, in a distinctive sense, gentlemen; who have lived so constantly and habitually on intimate terms with the highest things in thought and character that the tone of this really best society has become theirs. Among men of talent there are plebeians as well as patricians; even genius, which is never vulgar, is sometimes unable to hide the vulgarity of the aims and ideas which it clothes with beauty without concealing their essential nature....