Famous Affinities of History - Volume 4 The Romance of Devotion 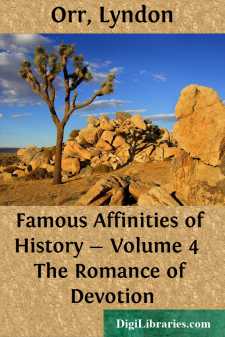 DEAN SWIFT AND THE TWO ESTHERS

The story of Jonathan Swift and of the two women who gave their lives for love of him is familiar to every student of English literature. Swift himself, both in letters and in politics, stands out a conspicuous figure in the reigns of King William III and Queen Anne. By writing Gulliver's Travels he made himself immortal. The external facts of his singular relations with two charming women are sufficiently well known; but a definite explanation of these facts has never yet been given. Swift held his tongue with a repellent taciturnity. No one ever dared to question him. Whether the true solution belongs to the sphere of psychology or of physiology is a question that remains unanswered.

But, as the case is one of the most puzzling in the annals of love, it may be well to set forth the circumstances very briefly, to weigh the theories that have already been advanced, and to suggest another.

Jonathan Swift was of Yorkshire stock, though he happened to be born in Dublin, and thus is often spoken of as "the great Irish satirist," or "the Irish dean." It was, in truth, his fate to spend much of his life in Ireland, and to die there, near the cathedral where his remains now rest; but in truth he hated Ireland and everything connected with it, just as he hated Scotland and everything that was Scottish. He was an Englishman to the core.

High-stomached, proud, obstinate, and over-mastering, independence was the dream of his life. He would accept no favors, lest he should put himself under obligation; and although he could give generously, and even lavishly, he lived for the most part a miser's life, hoarding every penny and halfpenny that he could. Whatever one may think of him, there is no doubt that he was a very manly man. Too many of his portraits give the impression of a sour, supercilious pedant; but the finest of them all—that by Jervas—shows him as he must have been at his very prime, with a face that was almost handsome, and a look of attractive humor which strengthens rather than lessens the power of his brows and of the large, lambent eyes beneath them.

At fifteen he entered Trinity College, in Dublin, where he read widely but studied little, so that his degree was finally granted him only as a special favor. At twenty-one he first visited England, and became secretary to Sir William Temple, at Moor Park. Temple, after a distinguished career in diplomacy, had retired to his fine country estate in Surrey. He is remembered now for several things—for having entertained Peter the Great of Russia; for having, while young, won the affections of Dorothy Osborne, whose letters to him are charming in their grace and archness; for having been the patron of Jonathan Swift; and for fathering the young girl named Esther Johnson, a waif, born out of wedlock, to whom Temple gave a place in his household.

When Swift first met her, Esther Johnson was only eight years old; and part of his duties at Moor Park consisted in giving her what was then an unusual education for a girl....