Famous Affinities of History - Volume 3 The Romance of Devotion 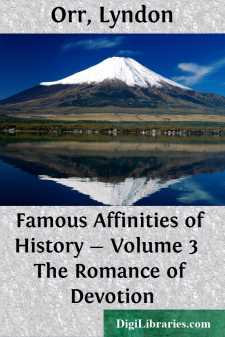 THE WIVES OF GENERAL HOUSTON

Sixty or seventy years ago it was considered a great joke to chalk up on any man's house-door, or on his trunk at a coaching-station, the conspicuous letters "G. T. T." The laugh went round, and every one who saw the inscription chuckled and said: "They've got it on you, old hoss!" The three letters meant "gone to Texas"; and for any man to go to Texas in those days meant his moral, mental, and financial dilapidation. Either he had plunged into bankruptcy and wished to begin life over again in a new world, or the sheriff had a warrant for his arrest.

The very task of reaching Texas was a fearful one. Rivers that overran their banks, fever-stricken lowlands where gaunt faces peered out from moldering cabins, bottomless swamps where the mud oozed greasily and where the alligator could be seen slowly moving his repulsive form—all this stretched on for hundreds of miles to horrify and sicken the emigrants who came toiling on foot or struggling upon emaciated horses. Other daring pioneers came by boat, running all manner of risks upon the swollen rivers. Still others descended from the mountains of Tennessee and passed through a more open country and with a greater certainty of self-protection, because they were trained from childhood to wield the rifle and the long sheath-knife.

It is odd enough to read, in the chronicles of those days, that amid all this suffering and squalor there was drawn a strict line between "the quality" and those who had no claim to be patricians. "The quality" was made up of such emigrants as came from the more civilized East, or who had slaves, or who dragged with them some rickety vehicle with carriage-horses—however gaunt the animals might be. All others—those who had no slaves or horses, and no traditions of the older states—were classed as "poor whites"; and they accepted their mediocrity without a murmur.

Because he was born in Lexington, Virginia, and moved thence with his family to Tennessee, young Sam Houston—a truly eponymous American hero—was numbered with "the quality" when, after long wandering, he reached his boyhood home. His further claim to distinction as a boy came from the fact that he could read and write, and was even familiar with some of the classics in translation.

When less than eighteen years of age he had reached a height of more than six feet. He was skilful with the rifle, a remarkable rough-and-tumble fighter, and as quick with his long knife as any Indian. This made him a notable figure—the more so as he never abused his strength and courage. He was never known as anything but "Sam." In his own sphere he passed for a gentleman and a scholar, thanks to his Virginian birth and to the fact that he could repeat a great part of Pope's translation of the "Iliad."

His learning led him to teach school a few months in the year to the children of the white settlers. Indeed, Houston was so much taken with the pursuit of scholarship that he made up his mind to learn Greek and Latin. Naturally, this seemed mere foolishness to his mother, his six strapping brothers, and his three stalwart sisters, who cared little for study....