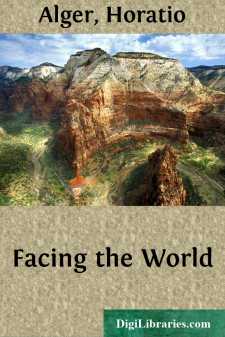 "Here's a letter for you, Harry," said George Howard. "I was passing the hotel on my way home from school when Abner Potts called out to me from the piazza, and asked me to bring it."

The speaker was a bright, round-faced boy of ten. The boy whom he addressed was five or six years older. Only a week previous he had lost his father, and as the family consisted only of these two, he was left, so far as near relatives were concerned, alone in the world.

Immediately after the funeral he had been invited home by Mr. Benjamin Howard, a friend of his father, but in no manner connected with him by ties of relationship.

"You can stay here as long as you like, Harry," said Mr. Howard, kindly. "It will take you some time to form your plans, perhaps, and George will be glad to have your company."

"Shall you look for some employment here?"

"No; my father has a second cousin in Colebrook, named John Fox. Before he died he advised me to write to Mr. Fox, and go to his house if I should receive an invitation."

"I hope for your sake, he will prove a good man. What is his business?"

"I don't know, nor did my father. All I know is, that he is considered a prosperous man. This letter is from him."

It was inclosed in a brown envelope, and ran as follows:

"HARRY VANE: I have received your letter saying that your father wants me to be your guardeen. I don't know as I have any objections, bein' a business man it will come easy to me, and I think your father was wise to seleck me. I am reddy to receave you any time. You will come to Bolton on the cars. That is eight miles from here, and there is a stage that meats the trane. It wouldn't do you any harm to walk, but boys ain't so active as they were in my young days. The stage fare is fifty cents, which I shall expect you to pay yourself, if you ride.

"There is one thing you don't say anything about—how much proparty your pa left. I hope it is a good round sum, and I will take good care of it for you. Ennybody round here will tell you that John Fox is a good man of business, and about as sharp as most people. Mrs. Fox will be glad to see you, and my boy, Joel, will be glad to have someone to keep him company. He is about sixteen years old. You don't say how old you are, but from your letter I surmise that you are as much as that. You will find a happy united famerly, consistin' of me and my wife, Joel and his sister, Sally. Sally is fourteen, just two years younger than Joel. We live in a comfortable way, but we don't gorge ourselves on rich, unhelthy food. No more at present. Yours to command,

Harry smiled more than once as he read this letter.

"Your relative isn't strong on spelling," remarked Mr. Howard, as he laid the letter on the table.

"No, sir; but he appears to be strong on economy. It is a comfort to know that I shall not be injured by 'rich, unhelthy food.'"

"When do you mean to start for Colebrook?" asked Mr. Howard.

"To-morrow morning. I have been looking at a railroad guide, and I find it will bring me to Colebrook in time for supper."

"We should be glad to have you stay with us as long as possible,Harry."

"Thank you, Mr. Howard, I don't doubt that, but the struggle of life is before me, and I may as well enter upon it at once."

At four o'clock in the afternoon the conductor of the train on whichHarry was a passenger called out Bolton....