Facing Death The Hero of the Vaughan Pit. A Tale of the Coal Mines 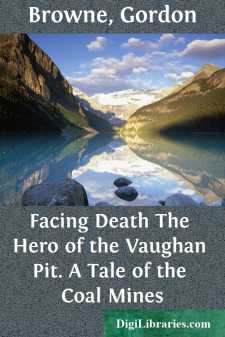 row of brick-built houses with slate roofs, at the edge of a large mining village in Staffordshire. The houses are dingy and colourless, and without relief of any kind. So are those in the next row, so in the street beyond, and throughout the whole village. There is a dreary monotony about the place; and if some giant could come and pick up all the rows of houses, and change their places one with another, it is a question whether the men, now away at work, would notice any difference whatever until they entered the houses standing in the place of those which they had left in the morning. There is a church, and a vicarage half hidden away in the trees in its pretty old-fashioned garden; there are two or three small red-bricked dissenting chapels, and the doctor's house, with a bright brass knocker and plate on the door. There are no other buildings above the common average of mining villages; and it needs not the high chimneys, and engine-houses with winding gear, dotting the surrounding country, to notify the fact that Stokebridge is a mining village.

It is a little past noon, and many of the women come to their doors and look curiously after a miner, who, in his working clothes, and black with coal-dust, walks rapidly towards his house, with his head bent down, and his thick felt hat slouched over his eyes.

"What brings he up at this hour?"

Bill Haden stopped at the door of his house in the row first spoken of, lifted the latch, and went in. He walked along a narrow passage into the back-room. His wife, who was standing at the washing-tub, turned round with a surprised exclamation, and a bull-dog with half-a-dozen round tumbling puppies scrambled out of a basket by the fire, and rushed to greet him.

"What is it, Bill? what's brought thee home before time?"

For a moment Bill Haden did not answer, but stooped, and, as it were mechanically, lifted the dog and stroked its head.

"There's blood on thy hands, Bill. What be wrong with 'ee?"

"Ay, Jack Simpson; the mate I ha' worked with ever since we were butties together. A fall just came as we worked side by side in the stall, and it broke his neck, and he's dead."

The woman dropped into a chair, threw her apron over her head, and cried aloud, partly at the loss of her husband's mate, partly at the thought of the narrow escape he had himself had.

"Now, lass," her husband said, "there be no time to lose. It be for thee to go and break it to his wife. I ha' come straight on, a purpose. I thawt to do it, but I feel like a gal myself, and it had best be told her by another woman."

Jane Haden took her apron from her face.

"Oh, Bill, how can I do it, and she ill, and with a two-month baby? I misdoubt me it will kill her."

"Thou'st got to do it," Bill said doggedly, "and thou'd best be quick about it; it won't be many minutes afore they bring him in."

When Bill spoke in that way his wife knew, as he said, that she'd got to do it, and without a word she rose and went out, while her husband stood staring into the fire, and still patting the bull-dog in his arms....