Fables for the Frivolous 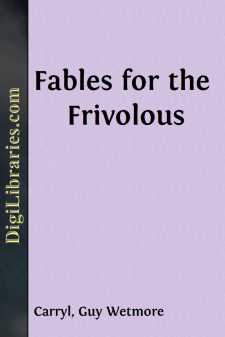 A farmer built around his crop    A wall, and crowned his labors  By placing glass upon the top    To lacerate his neighbors,      Provided they at any time      Should feel disposed the wall to climb.

He also drove some iron pegs    Securely in the coping,  To tear the bare, defenceless legs    Of brats who, upward groping,      Might steal, despite the risk of fall,      The grapes that grew upon the wall.

One day a fox, on thieving bent,    A crafty and an old one,  Most shrewdly tracked the pungent scent    That eloquently told one      That grapes were ripe and grapes were good      And likewise in the neighborhood.

He threw some stones of divers shapes    The luscious fruit to jar off:  It made him ill to see the grapes    So near and yet so far off.      His throws were strong, his aim was fine,      But "Never touched me!" said the vine.

The farmer shouted, "Drat the boys!"  And, mounting on a ladder,  He sought the cause of all the noise;  No farmer could be madder,    Which was not hard to understand    Because the glass had cut his hand.

The farmer rudely answered back    With compliments unvarnished,  And downward hurled the bric-a-brac    With which the wall was garnished,      In view of which demeanor strange,      The fox retreated out of range.

The moral is that if your host    Throws glass around his entry  You know it isn't done by most    Who claim to be the gentry,      While if he hits you in the head      You may be sure he's underbred.

THE PERSEVERING TORTOISE AND THE PRETENTIOUS HARE

Once a turtle, finding plenty    In seclusion to bewitch,  Lived a dolce far niente    Kind of life within a ditch;  Rivers had no charm for him,    As he told his wife and daughter,  "Though my friends are in the swim,    Mud is thicker far than water."

One fine day, as was his habit,    He was dozing in the sun,  When a young and flippant rabbit    Happened by the ditch to run:  "Come and race me," he exclaimed,    "Fat inhabitant of puddles.  Sluggard! You should be ashamed.    Such a life the brain befuddles."

This, of course, was banter merely,    But it stirred the torpid blood  Of the turtle, and severely    Forth he issued from the mud.  "Done!" he cried. The race began,    But the hare resumed his banter,  Seeing how his rival ran    In a most unlovely canter.