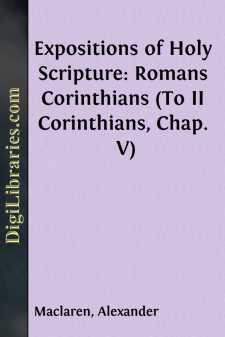 THE WITNESS OF THE RESURRECTION ‘Declared to be the Son of God with power, ... by the resurrection of the dead.’—ROMANS i. 4 (R. V.).

It is a great mistake to treat Paul's writings, and especially this Epistle, as mere theology. They are the transcript of his life's experience. As has been well said, the gospel of Paul is an interpretation of the significance of the life and work of Jesus based upon the revelation to him of Jesus as the risen Christ. He believed that he had seen Jesus on the road to Damascus, and it was that appearance which revolutionised his life, turned him from a persecutor into a disciple, and united him with the Apostles as ordained to be a witness with them of the Resurrection. To them all the Resurrection of Jesus was first of all a historical fact appreciated chiefly in its bearing on Him. By degrees they discerned that so transcendent a fact bore in itself a revelation of what would become the experience of all His followers beyond the grave, and a symbol of the present life possible for them. All three of these aspects are plainly declared in Paul's writings. In our text it is chiefly the first which is made prominent. All that distinguishes Christianity; and makes it worth believing, or mighty, is inseparably connected with the Resurrection.

I. The Resurrection of Christ declares His Sonship.

Resurrection and Ascension are inseparably connected. Jesus does not rise to share again in the ills and weariness of humanity. Risen, ‘He dieth no more; death hath no more dominion over Him.’ ‘He died unto sin once’; and His risen humanity had nothing in it on which physical death could lay hold. That He should from some secluded dimple on Olivet ascend before the gazing disciples until the bright cloud, which was the symbol of the Divine Presence, received Him out of their sight, was but the end of the process which began unseen in morning twilight. He laid aside the garments of the grave and passed out of the sepulchre which was made sure by the great stone rolled against its mouth. The grand avowal of faith in His Resurrection loses meaning, unless it is completed as Paul completed his ‘yea rather that was raised from the dead,’ with the triumphant ‘who is at the right hand of God.’ Both are supernatural, and the Virgin Birth corresponds at the beginning to the supernatural Resurrection and Ascension at the close. Both such an entrance into the world and such a departure from it, proclaim at once His true humanity, and that ‘this is the Son of God.’

Still further, the Resurrection is God's solemn ‘Amen’ to the tremendous claims which Christ had made. The fact of His Resurrection, indeed, would not declare His divinity; but the Resurrection of One who had spoken such words does. If the Cross and a nameless grave had been the end, what a reductio ad absurdum that would have been to the claims of Jesus to have ever been with the Father and to be doing always the things that pleased Him. The Resurrection is God's last and loudest proclamation, ‘This is My beloved Son: hear ye Him.’ The Psalmist of old had learned to trust that his sonship and consecration to the Father made it impossible that that Father should leave his soul in Sheol, or suffer one who was knit to Him by such sacred bonds to see corruption; and the unique Sonship and perfect self-consecration of Jesus went down into the grave in the assured confidence, as He Himself declared, that the third day He would rise again....