Experiments and Observations on Different Kinds of Air 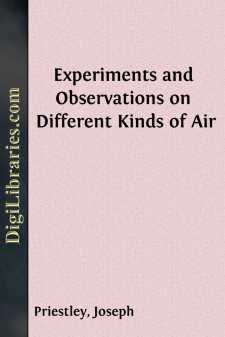 One reason for the present publication has been the favourable reception of those of my Observations on different kinds of air, which were published in the Philosophical Transactions for the year 1772, and the demand for them by persons who did not chuse, for the sake of those papers only, to purchase the whole volume in which they were contained. Another motive was the additions to my observations on this subject, in consequence of which my papers grew too large for such a publication as the Philosophical Transactions.

Contrary, therefore, to my intention, expressed Philosophical Transactions, vol. 64. p. 90, but with the approbation of the President, and of my friends in the society, I have determined to send them no more papers for the present on this subject, but to make a separate and immediate publication of all that I have done with respect to it.

Besides, considering the attention which, I am informed, is now given to this subject by philosophers in all parts of Europe, and the rapid progress that has already been made, and may be expected to be made in this branch of knowledge, all unnecessary delays in the publication of experiments relating to it are peculiarly unjustifiable.

When, for the sake of a little more reputation, men can keep brooding over a new fact, in the discovery of which they might, possibly, have very little real merit, till they think they can astonish the world with a system as complete as it is new, and give mankind a prodigious idea of their judgment and penetration; they are justly punished for their ingratitude to the fountain of all knowledge, and for their want of a genuine love of science and of mankind, in finding their boasted discoveries anticipated, and the field of honest fame pre-occupied, by men, who, from a natural ardour of mind, engage in philosophical pursuits, and with an ingenuous simplicity immediately communicate to others whatever occurs to them in their inquiries.

As to myself, I find it absolutely impossible to produce a work on this subject that shall be any thing like complete. My first publication I acknowledged to be very imperfect, and the present, I am as ready to acknowledge, is still more so. But, paradoxical as it may seem, this will ever be the case in the progress of natural science, so long as the works of God are, like himself, infinite and inexhaustible. In completing one discovery we never fail to get an imperfect knowledge of others, of which we could have no idea before; so that we cannot solve one doubt without creating several new ones.

Travelling on this ground resembles Pope's description of travelling among the Alps, with this difference, that here there is not only succession, but an increase of new objects and new difficulties.

So pleas'd at first the tow'ring Alps we try,Mount o'er the vales, and seem to tread the sky.Th' eternal snows appear already past,And the first clouds and mountains seem the last,But those attain'd, we tremble to surveyThe growing labours of the lengthen'd way....