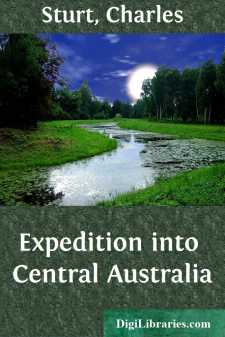 The Australian continent is not distinguished, as are many other continents of equal and even of less extent, by any prominent geographical feature. Its mountains seldom exceed four thousand feet in elevation, nor do any of its rivers, whether falling internally or externally, not even the Murray, bear any proportion to the size of the continent itself. There is no reason, however, why rivers of greater magnitude, than any which have hitherto been discovered in it, should not emanate from mountains of such limited altitude, as the known mountains of that immense and sea-girt territory. But, it appears to me, it is not in the height and character of its hilly regions, that we are to look for the causes why so few living streams issue from them. The true cause, I apprehend, lies in its climate, in its seldom experiencing other than partial rains, and in its being subject to severe and long continued droughts. Its streams descend rapidly into a country of uniform equality of surface, and into a region of intense heat, and are subject, even at a great distance from their sources, to sudden and terrific floods, which subside, as the cause which gave rise to them ceases to operate; the consequence is, that their springs become gradually weaker and weaker, all back impulse is lost, and whilst the rivers still continue to support a feeble current in the hills, they cease to flow in their lower branches, assume the character of a chain of ponds, in a few short weeks their deepest pools are exhausted by the joint effects of evaporation and absorption, and the traveller may run down their beds for miles, without finding a drop of water with which to slake his thirst.

In illustration of the above, I would observe that during the progress of the recent expedition up the banks of the Darling, and at a distance of more than 300 miles from its sources, that river rose from a state of complete exhaustion, until in four days it overflowed its banks. It was converted in a single night, from an almost dry channel, into a foaming and impetuous stream, rolling along its irresistible and turbid waters, to add to those of the Murray.

There can be no doubt, but, that this sudden rise in the river, was caused by heavy rains on the mountains, in which its tributaries are to be found, for the Darling does not receive any accession to its waters below their respective junctions, of sufficient magnitude to account for such an occurrence. [Note 1. below]

[Note 1. The principal tributaries of the Darling, are the Kindur, the Keraula, the Namoy, and the Gwydir. They are beautiful mountain streams, and rise in the hilly country, behind Moreton Bay, in lat. 27 degrees, and in longitude 152 degrees E.]

When, on the return of the expedition homewards the following year, some two months later in the season than that of which I have just been speaking, Oct. 1844, there had been no recurrence of the flood of the previous year, but the Darling was at a still lower ebb than before, and every lagoon, and creek in its vicinity had long been exhausted and waterless. [Note 2. below] Now, it is evident, as far as I can judge, that if the rains of Australia were as regular as in other countries, its rivers would also be more regular in their flow, and would not present the anomaly they now do, of being in a state of rapid motion at one time, and motionless at another.

[Note 2. It may be necessary to warn my readers that a creek in the Australian colonies, is not always an arm of the sea. The same term is used to designate a watercourse, whether large or small, in which the winter torrents may or may not have left a chain of ponds. Such a watercourse could hardly be called a river, since it only flows during heavy rains, after which it entirely depends on the character of the soil, through which it runs, whether any water remains in it or not.]

A lagoon is a shallow lake, it generally constitutes the back water of some river, and is speedily dried up. In Australia, there is no surface water, properly so called, of a permanent description.]

But, although I am making these general observations on the rivers, and to a certain extent of climate of Australia, I would not be understood to mean more than that its seasons are uncertain, and that its summers are of comparatively long duration.

In reference to its rivers also, the Murray is an exception to the other known rivers of this extensive continent. The basins of that fine stream are in the deepest recesses of the Australian Alps--which rise to an elevation of 7000 feet above the sea. The heads of its immediate tributaries, extend from the 36th to the 32nd parallel of latitude, and over two degrees of longitude, that is to say, from the 146 degrees to the 148 degrees meridian, but, independently of these, it receives the whole westerly drainage of the interior, from the Darling downwards....