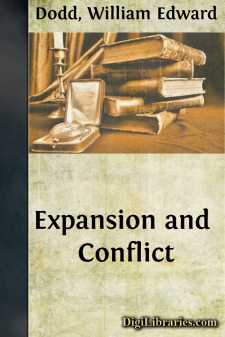 The purpose of this volume is to show the action and reaction of the most important social, economic, political, and personal forces that have entered into the make-up of the United States as a nation. The primary assumption of the author is that the people of this country did not compose a nation until after the close of the Civil War in 1865. Of scarcely less importance is the fact that the decisive motive behind the different groups in Congress at every great crisis of the period under discussion was sectional advantage or even sectional aggrandizement. If Webster ceased to be a particularist after 1824 and became a nationalist before 1830, it was because the interests of New England had undergone a similar change; or, if Calhoun deserted about the same time the cause of nationalism and became the most ardent of sectionalists, it was also because the interests of his constituents, the cotton and tobacco planters of the South, had become identified with particularism, that is, States rights.

And corollary to these assumptions is the further fact that public men usually determine what line of procedure is best for their constituents, or for what are supposed to be the interests of those constituents, and then seek for “powers” or clauses in State or Federal Constitutions which justify the predetermined course. This being, as a rule, true, the business of the historian is to understand the influences which led to the first, not the second, decision of the Representative or Senator or President or even Justice of the Supreme Court. Hence long-winded speeches or tortuous decisions of courts have not been studied so closely as the statistics of the cotton or tobacco crops, the reports of manufacturers, and the conditions of the frontier, which determined more of the votes of members of Congress than the most eloquent persuasion of great orators.

Thus the following pages utterly fail of their purpose if they do not picture the background of congressional and sectional conflicts during the period from Andrew Jackson to Abraham Lincoln. But, to be sure, in so brief a book all the contributing elements of the growing national life cannot be fully described or even be mentioned. Still, it is the hope of the author that all the greater subjects have been treated. What has been omitted was omitted in order to devote more space to what seemed to be more important, not in order to suppress what some may consider to be of primary significance. Three hundred short pages for the story of the great conflict which raged from 1828 to 1865 do not offer much latitude for explanations and diversions along the way. Nor is it possible for any one to describe this conflict satisfactorily even to all historians, to say nothing of the participants who still live and entertain the most positive and contradictory convictions. Hence one must present one's own narrative and be content if open-mindedness and honesty of purpose be acknowledged.

The book is intended for the maturer students in American colleges and universities and for readers who may be desirous of knowing why things happened as they did as well as how they happened....