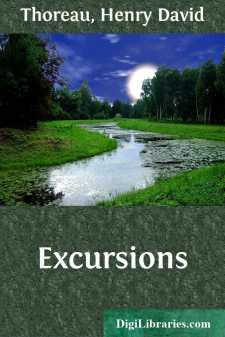 HENRY DAVID THOREAU was the last male descendant of a French ancestor who came to this country from the Isle of Guernsey. His character exhibited occasional traits drawn from this blood in singular combination with a very strong Saxon genius.

He was born in Concord, Massachusetts, on the 12th of July, 1817. He was graduated at Harvard College in 1837, but without any literary distinction. An iconoclast in literature, he seldom thanked colleges for their service to him, holding them in small esteem, whilst yet his debt to them was important. After leaving the University, he joined his brother in teaching a private school, which he soon renounced. His father was a manufacturer of lead-pencils, and Henry applied himself for a time to this craft, believing he could make a better pencil than was then in use. After completing his experiments, he exhibited his work to chemists and artists in Boston, and having obtained their certificates to its excellence and to its equality with the best London manufacture, he returned home contented. His friends congratulated him that he had now opened his way to fortune. But he replied, that he should never make another pencil. "Why should I? I would not do again what I have done once." He resumed his endless walks and miscellaneous studies, making every day some new acquaintance with Nature, though as yet never speaking of zoölogy or botany, since, though very studious of natural facts, he was incurious of technical and textual science.

At this time, a strong, healthy youth, fresh from college, whilst all his companions were choosing their profession, or eager to begin some lucrative employment, it was inevitable that his thoughts should be exercised on the same question, and it required rare decision to refuse all the accustomed paths, and keep his solitary freedom at the cost of disappointing the natural expectations of his family and friends: all the more difficult that he had a perfect probity, was exact in securing his own independence, and in holding every man to the like duty. But Thoreau never faltered. He was a born protestant. He declined to give up his large ambition of knowledge and action for any narrow craft or profession, aiming at a much more comprehensive calling, the art of living well. If he slighted and defied the opinions of others, it was only that he was more intent to reconcile his practice with his own belief. Never idle or self-indulgent, he preferred, when he wanted money, earning it by some piece of manual labor agreeable to him, as building a boat or a fence, planting, grafting, surveying, or other short work, to any long engagements. With his hardy habits and few wants, his skill in wood-craft, and his powerful arithmetic, he was very competent to live in any part of the world. It would cost him less time to supply his wants than another. He was therefore secure of his leisure.

A natural skill for mensuration, growing out of his mathematical knowledge, and his habit of ascertaining the measures and distances of objects which interested him, the size of trees, the depth and extent of ponds and rivers, the height of mountains, and the air-line distance of his favorite summits,—this, and his intimate knowledge of the territory about Concord, made him drift into the profession of land-surveyor....