Evolution, Old & New Or, the Theories of Buffon, Dr. Erasmus Darwin and Lamarck, as compared with that of Charles Darwin 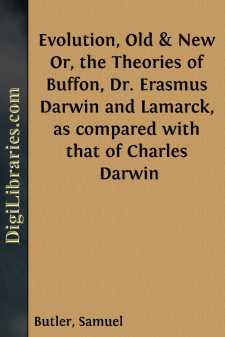 Contrary to the advice of my friends, who caution me to avoid all appearance of singularity, I venture upon introducing a practice, the expediency of which I will submit to the judgment of the reader. It is one which has been adopted by musicians for more than a century—to the great convenience of all who are fond of music—and I observe that within the last few years two such distinguished painters as Mr. Alma-Tadema and Mr. Hubert Herkomer have taken to it. It is a matter for regret that the practice should not have been general at an earlier date, not only among painters and musicians, but also among the people who write books. It consists in signifying the number of a piece of music, picture, or book by the abbreviation "Op." and the number whatever it may happen to be.

No work can be judged intelligently unless not only the author's relations to his surroundings, but also the relation in which the work stands to the life and other works of the author, is understood and borne in mind; nor do I know any way of conveying this information at a glance, comparable to that which I now borrow from musicians. When we see the number against a work of Beethoven, we need ask no further to be informed concerning the general character of the music. The same holds good more or less with all composers. Handel's works were not numbered—not at least his operas and oratorios. Had they been so, the significance of the numbers on Susanna and Theodora would have been at once apparent, connected as they would have been with the number on Jephthah, Handel's next and last work, in which he emphatically repudiates the influence which, perhaps in a time of self-distrust, he had allowed contemporary German music to exert over him. Many painters have dated their works, but still more have neglected doing so, and some of these have been not a little misconceived in consequence. As for authors, it is unnecessary to go farther back than Lord Beaconsfield, Thackeray, Dickens, and Scott, to feel how much obliged we should have been to any custom that should have compelled them to number their works in the order in which they were written. When we think of Shakespeare, any doubt which might remain as to the advantage of the proposed innovation is felt to disappear.

My friends, to whom I urged all the above, and more, met me by saying that the practice was doubtless a very good one in the abstract, but that no one was particularly likely to want to know in what order my books had been written. To which I answered that even a bad book which introduced so good a custom would not be without value, though the value might lie in the custom, and not in the book itself; whereon, seeing that I was obstinate, they left me, and interpreting their doing so into at any rate a modified approbation of my design, I have carried it into practice.

The edition of the 'Philosophie Zoologique' referred to in the following volume, is that edited by M. Chas. Martins, Paris, Librairie F. Savy, 24, Rue de Hautefeuille, 1873.

The edition of the 'Origin of Species' is that of 1876, unless another edition be especially named.

The italics throughout the book are generally mine, except in the quotations from Miss Seward, where they are all her own.

I am anxious also to take the present opportunity of acknowledging the obligations I am under to my friend Mr. H. F. Jones, and to other friends (who will not allow me to mention their names, lest more errors should be discovered than they or I yet know of), for the invaluable assistance they have given me while this work was going through the press. If I am able to let it go before the public with any comfort or peace of mind, I owe it entirely to the carefulness of their supervision.

I am also greatly indebted to Mr. Garnett, of the British Museum, for having called my attention to many works and passages of which otherwise I should have known nothing....