Evidence as to Man's Place in Nature 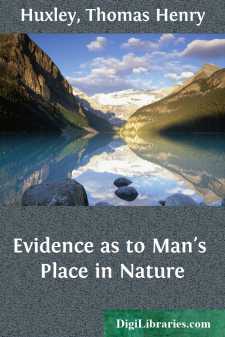 ON THE NATURAL HISTORY OF THE MAN-LIKE APES

Ancient traditions, when tested by the severe processes of modern investigation, commonly enough fade away into mere dreams: but it is singular how often the dream turns out to have been a half-waking one, presaging a reality. Ovid foreshadowed the discoveries of the geologist: the Atlantis was an imagination, but Columbus found a western world: and though the quaint forms of Centaurs and Satyrs have an existence only in the realms of art, creatures approaching man more nearly than they in essential structure, and yet as thoroughly brutal as the goat's or horse's half of the mythical compound, are now not only known, but notorious.

I have not met with any notice of one of these MAN-LIKE APES of earlier date than that contained in Pigafetta's 'Description of the Kingdom of Congo,' drawn up from the notes of a Portuguese sailor, Eduardo Lopez, and published in 1598. The tenth chapter of this work is entitled "De Animalibus quae in hac provincia reperiuntur," and contains a brief passage to the effect that "in the Songan country, on the banks of the Zaire, there are multitudes of apes, which afford great delight to the nobles by imitating human gestures." As this might apply to almost any kind of apes, I should have thought little of it, had not the brothers De Bry, whose engravings illustrate the work, thought fit, in their eleventh 'Argumentum,' to figure two of these "Simiae magnatum deliciae." So much of the plate as contains these apes is faithfully copied in the woodcut (Fig. 1), and it will be observed that they are tail-less, long-armed, and large-eared; and about the size of Chimpanzees.

It may be that these apes are as much figments of the imagination of the ingenious brothers as the winged, two-legged, crocodile-headed dragon which adorns the same plate; or, on the other hand, it may be that the artists have constructed their drawings from some essentially faithful description of a Gorilla or a Chimpanzee. And, in either case, though these figures are worth a passing notice, the oldest trustworthy and definite accounts of any animal of this kind date from the 17th century, and are due to an Englishman.

The first edition of that most amusing old book, 'Purchas his Pilgrimage,' was published in 1613, and therein are to be found many references to the statements of one whom Purchas terms "Andrew Battell (my neere neighbour, dwelling at Leigh in Essex) who served under Manuel Silvera Perera, Governor under the King of Spaine, at his city of Saint Paul, and with him went farre into the countrey of Angola"; and again, "my friend, Andrew Battle, who lived in the kingdom of Congo many yeares," and who, "upon some quarell betwixt the Portugals (among whom he was a sergeant of a band) and him, lived eight or nine moneths in the woodes." From this weather-beaten old soldier, Purchas was amazed to hear "of a kinde of Great Apes, if they might so bee termed, of the height of a man, but twice as bigge in feature of their limmes, with strength proportionable, hairie all over, otherwise altogether like men and women in their whole bodily shape....