"Everyman," with other interludes, including eight miracle plays 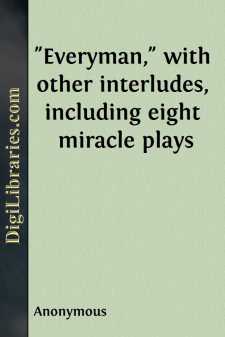 By craftsmen and mean men, these pageants are played,And to commons and countrymen accustomably before:If better men and finer heads now come, what can be said?

The pageants of the old English town-guilds, and the other mysteries and interludes that follow, have still an uncommon reality about them if we take them in the spirit in which they were originally acted. Their office as the begetters of the greater literary drama to come, and their value as early records, have, since Sharp wrote his Dissertation on the Coventry Mysteries in 1816, been fully illustrated. But they have hardly yet reached the outside reader who looks for life and not for literary origins and relations in what he reads. This is a pity, for these old plays hide under their archaic dress the human interest that all dramatic art, no matter how crude, can claim when it is touched with our real emotions and sensations. They are not only a primitive religious drama, born of the church and its feasts; they are the genuine expression of the town life of the English people when it was still lived with some exuberance of spirits and communal pleasure. As we read them, indeed, though it be in cold blood, we are carried out of our book, and set in the street or market-square by the side of the "commons and countrymen," as in the day when Whitsuntide, or Corpus Christi, brought round the annual pageantry to Chester, Coventry, York, and other towns.

Of the plays that follow, six come from the old town pageants, reflecting in their variety the range of subject and the contemporary effect of the cycles from which they are taken. They are all typical, and show us how the scenes and characters of the east were mingled with the real life of the English craftsmen and townsfolk who acted them, and for whose pleasure they were written. Yet they give us only a small notion of the whole interest and extent of these plays. We gain an idea of their popularity both from the number of them given in one town and the number of places at which regular cycles, or single pageants, were represented from year to year. The York plays alone that remain are forty-eight in all; the Chester, twenty-four or five; the Wakefield, thirty-two or three. Even these do not represent anything like the full list. Mr. E. K. Chambers, in an appendix to his Mediæval Stage, gives a list of eighty-nine different episodes treated in one set or another of the English and Cornish cycles. Then as to the gazette of the many scattered places where they had a traditional hold: Beverley had a cycle of thirty-six; Newcastle-on-Tyne and Norwich, each one of twelve; while the village and parochial plays were almost numberless. In Essex alone the list includes twenty-one towns and villages, though it is fair to add that this was a specially enterprising shire. At Lydd and New Romney, companies of players from fourteen neighbouring towns and villages can be traced in the local records that stretch from a year or so before, to eight years after, the fifteenth century....