Every Man His Own Poet Or, The Inspired Singer's Recipe Book 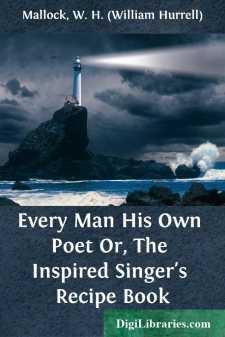 o have attempted in former times a work of this description, would have seemed, we cannot deny, to savour either of presumption or of idiotcy, or more probably of both. And rightly. But we live in times of progress. The mystery of yesterday is the common-place of to-day; the Bible, which was Newton's oracle, is Professor Huxley's jest-book; and students at the University now lose a class for not being familiar with opinions, which but twenty years ago they would have been expelled for dreaming of. Everything is moving onward swiftly and satisfactorily; and if, when we have made all faiths fail, we can only contrive to silence the British Association, and so make all knowledge vanish away, there will lack nothing but the presence of a perfect charity to turn the nineteenth century into a complete kingdom of heaven. Amongst changes, then, so great and so hopeful—amongst the discoveries of the rights of women, the infallibility of the Pope, and the physical basis of life, it may well be doubted if the great fathers of ancient song would find, if they could come back to us, anything out of the way or ludicrous in a recipe-book for concocting poetry.

Some, indeed, object that poetry is not progressive. But on what grounds this assertion is based, it is not possible to conjecture. Poetry is as much progressive as anything else in these days of progress. Free-thought itself shews scarcely more strikingly those three great stages which mark advance and movement. For poetry, like Free-thought, was first a work of inspiration, secondly of science, and lastly now of trick. At its first stage it was open to only here and there a genius; at its next to all intelligent men; and at its third to all the human race. Thus, just as there is no boy now, but can throw stones at the windows which Bishop Colenso has broken, so there is scarcely even a young lady but can raise flowers from the seed stolen out of Mr. Tennyson's garden.

And surely, whatever, in this its course of change, poetry may have lost in quality, is more than made up for by what it has gained in quantity. For in the first place it is far pleasanter to the tastes of a scientific generation, to understand how to make bad poetry than to wonder at good; and secondly, as the end of poetry is pleasure, that we should make it each for ourselves is the very utmost that we can desire, since it is a fact in which we all agree, that no man's verses please him so much as his own.

OF THE NATURE OF POETRY.

oetry as practised by the latest masters, is the art of expressing what is too foolish, too profane, or too indecent to be expressed in any other way. And thus, just as a consummate cook will prepare a most delicate repast out of the most poor materials, so will the modern poet concoct us a most popular poem from the weakest emotions, and the most tiresome platitudes. The only difference is, that the cook would prefer good materials if he could get them, whilst the modern poet will take the bad from choice. As far, however, as the nature of materials goes, those which the two artists work with are the same—viz., animals, vegetables, and spirits. It was the practice of Shakespeare and other earlier masters to make use of all these together, mixing them in various proportions. But the moderns have found that it is better and far easier to employ each separately. Thus Mr. Swinburne uses very little else but animal matter in the composition of his dishes, which it must be confessed are somewhat unwholesome in consequence: whilst the late Mr. Wordsworth, on the contrary, confined himself almost exclusively to the confection of primrose pudding, and flint soup, flavoured with the lesser-celandine; and only now and then a beggar-boy boiled down in it to give it a colour. The robins and drowned lambs which he was wont to use, when an additional piquancy was needed, were employed so sparingly that they did not destroy in the least the general vegetable tone of his productions; and these form in consequence an unimpeachable lenten diet....