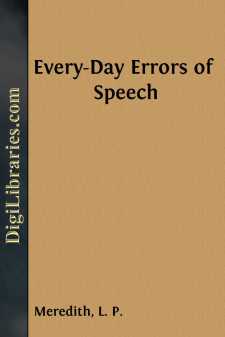 It may be regarded as one of the commendable peculiarities of the English language that, despite provincialisms, vulgarisms, neglected education, foreign accent, and the various corrupting influences to which it is subjected, it may be understood wherever it is heard, whatever differences of distance or associations may have existed between the speaker and the listener, both claiming familiarity with it. Considering these influences and the arbitrariness of the orthoepical rules of the language, there has been expressed surprise that frequent degenerations into uncouth dialects or patois have not occurred. A decent regard for the common weal should cause gratification that such degenerations have not taken place, for were it not for the ability of our tongue to preserve its individuality against the tendency toward corruption, we might reasonably fear such a Babel-like confusion, that, when asked, "Do you speak English?" one might appropriately, sans the profanity, reply in the language of the text, "Not as you pronounce it: Who the deuce could?" While the majority of people place no other value upon language than that of convenience, and are indifferent to any corruption, so long as they can simply understand and be understood, there is happily a better class, the æsthetic cultivation of which is such that those who belong to it are anxious to preserve the purity of our vernacular and are ashamed of all errors of speech in their daily conversations. For such it will not be uninteresting to look over a number of errors, principally of pronunciation, that are not formally laid down as such in books, and which people, even many of the best educated, are constantly committing, just because they have never had their attention called to them. These errors are becoming more deeply rooted every day and if not soon eradicated, it will not be many years before our orthoepic standard will be overthrown as it was in England some years ago.

Smart, one of the most celebrated of English orthoepists, in the preface of his dictionary says: "The proprietors of Walker's dictionary, finding it would slide entirely out of use unless it were adapted to the present day, engaged me as a teacher of elocution, known in London since Walker's time, to make the necessary changes." A standard pronouncing dictionary is a work that involves an extraordinary amount of labor and research in its compilation, and exerts an influence almost autocratical. The possibility of its becoming worthless in a short time is strange, especially when it is not on account of any work claiming superiority, but merely because error long persisted in finally becomes more authoritative than the original exemplar. With little effort, however, we can discern the causes. Persons are apt to acquire the pronunciation and use of the greater number of words by imitation, rather than by study. With confidence in the knowledge of the parent, teacher, minister, physician and others, their examples are followed without ever considering that they are often very fallible guides.

A complete dictionary is an immense volume, and to turn over its pages with even a casual observation of each word, requires an amount of time that few would feel like devoting to it; and yet this is the only way in which a person can become assured of the sanctioned pronunciation and meaning of a great many words. If they would make it an invariable rule to make memoranda of all the words they read or hear spoken, about the orthoepy and import of which they are not absolutely certain, and at their first leisure opportunity would consult their chosen authority, it would not be long before the majority of errors would be corrected; but this requires memory, inclination, time, continuity of purpose, possession of dictionaries or access to them—circumstances that are seldom found combined. It will doubtless be useless to rehearse any of the arguments commonly employed to prove the necessity of having some sovereign standard, to the guidance of which we must be willing to submit. Those for whom this work is intended will be willing to admit that. Nor is it necessary to assert that as far as the English speakers of the United States are interested, the only works that lay claim to such a position are the dictionaries of Webster and Worcester. If the right of the opinions of the majority of scholars throughout the land were alone considered, the former would certainly be entitled to the preference; but the work of the latter is too full of merit and has too many adherents in the ranks of the educated to permit any one to say that it is not worthy of high esteem.

With my own preference for the former and with my willingness to acknowledge the worth of the latter, I have consulted both authorities concerning every word in the following vocabulary—that is, every word requiring reference to either. It will be seen that there is much less difference between the decisions of the two dictionaries than is commonly supposed....