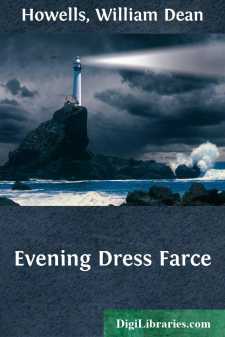 Mrs. Edward Roberts: "Now, my dear, Amy and I will get there early, so as to make up for your coming a little late, but you must be there for the last half, at least. I would excuse you altogether if I could, for I know you must be dead tired, up all night, that way, on the train, but Mrs. Miller is one of those people who never can listen to reason, and she would take deadly offence if you missed her musicale, and wouldn't forgive us the longest day she lived. So you see?" Mrs. Roberts addresses herself to her husband in the library of their apartment in Hotel Bellingham, at Boston, as she stands before the fire pulling on a long glove and looking at him across his desk, where he has sunk into a weary heap in his swivel chair. "You are dreadfully used up, Edward, and I think it's cruel to make you go out; but what can I do? If it was anybody but Mrs. Miller I wouldn't think of having you go; I'm sure I never want to have her about, anyway. But that's just the kind of people that you're a perfect slave to! Now, dear, I've let the two girls go out, and you must remember that you're in the place alone with the children; but you needn't be troubled, because nobody will come after this hour till Willis does, and the girls will be back before that. Willis is to come and get you on his way to the Millers', and it's all been arranged for you, and you needn't think of a thing till Willis comes. You'll have to dress, of course; but you needn't begin that at once, and you can just sit here in your chair and rest." Mr. Roberts stretches his arms wildly abroad, and, throwing back his head, permits himself a yawn that eclipses his whole face. Mrs. Roberts lets both her arms fall at her side in token of extreme despair. "Edward! If you should go to sleep!"

Roberts, pulling himself together, with a gigantic effort: "No, no! You needn't be afraid, my dear. But, oh! what wouldn't I give for a chance to!"

Mrs. Roberts, who sinks into a chair and regards the unhappy man with a look of tender compassion: "You poor thing, I've almost a mind to let you!"

Roberts, heroically: "No, it wouldn't do, Agnes. I must—ow, ugh, ow—go. Ugh, ow, ugh!" He abandons himself to a succession of abysmal yawns, in which the sequence of his ideas is altogether lost.

Mrs. Roberts: "Well, then, I shall have to trust you." She gathers her train up for departure, and moves slowly towards the door. "I don't think I've forgotten anything. Let me see: fan, handkerchief, both gloves; pins, because you're never sure that they've put enough, and you don't know where you'll come apart; head scarf, yes, I've got that on; fur boots, I've got them on. I really believe I'm all here. But I shouldn't be, Edward, if it were not for the system I put into everything; and I do wish, dear, that you'd try it once, just to please me!"

Mrs. Roberts: "Why, getting what you have to do by heart, and repeating it over. If you could only bring yourself to say: Both girls out; me alone with the children; Willis at ten; mustn't go to sleep; last half, anyway; Mrs. Miller awfully angry. There! If you could say that after me, I could go feeling so much easier! Won't you do it, Edward? I know it has a ridiculous sound, but—"

Roberts, yawning: "How am I to dress?"

Mrs. Roberts: "Edward! Well, I always will say that you're perfectly inspired! To think of my forgetting the most important thing, after all! Oh, I do believe there is an overruling Providence, I don't care what the agnostics pretend. Why, it's to be evening dress for the men, of course! Mrs. Miller would do it to be different from Mrs. Curwen, who let you come in your cutaways, even if it wasn't the regular thing; and she's gone around ever since saying it was the most rowdy, Bohemian thing she ever heard of, and she might as well have had beer, at once."

Mrs. Roberts: "Oh, Edward, I don't see how you can be so—But there! I won't blame you, dearest. I know you're just literally expiring for want of sleep, and it seems to me I must be the cruellest thing in the world to make you go. And if you'll say the word, I'll smash off a note now at the eleventh hour—though it's two hours of eleven yet!—and just tell Mrs. Miller that you've got home down sick, and I've had to stay and take care of you. Will you?"

Roberts: "Oh no, Agnes. It wouldn't be the truth."

Mrs. Roberts, in a rapture of admiration and affection: "Oh, who cares for the truth in such a cause, you poor heroic angel, you? Well, if you insist upon going, I suppose we must; and now the only way is for you to keep everything clearly in mind. You'd better say it over backward, now, and begin with evening dress, because that's the most important....