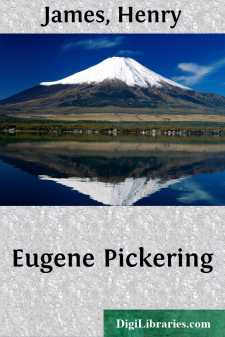 It was at Homburg, several years ago, before the gaming had been suppressed.  The evening was very warm, and all the world was gathered on the terrace of the Kursaal and the esplanade below it to listen to the excellent orchestra; or half the world, rather, for the crowd was equally dense in the gaming-rooms around the tables.  Everywhere the crowd was great.  The night was perfect, the season was at its height, the open windows of the Kursaal sent long shafts of unnatural light into the dusky woods, and now and then, in the intervals of the music, one might almost hear the clink of the napoleons and the metallic call of the croupiers rise above the watching silence of the saloons.  I had been strolling with a friend, and we at last prepared to sit down.  Chairs, however, were scarce.  I had captured one, but it seemed no easy matter to find a mate for it.  I was on the point of giving up in despair, and proposing an adjournment to the silken ottomans of the Kursaal, when I observed a young man lounging back on one of the objects of my quest, with his feet supported on the rounds of another.  This was more than his share of luxury, and I promptly approached him.  He evidently belonged to the race which has the credit of knowing best, at home and abroad, how to make itself comfortable; but something in his appearance suggested that his present attitude was the result of inadvertence rather than of egotism.  He was staring at the conductor of the orchestra and listening intently to the music.  His hands were locked round his long legs, and his mouth was half open, with rather a foolish air.  “There are so few chairs,” I said, “that I must beg you to surrender this second one.”  He started, stared, blushed, pushed the chair away with awkward alacrity, and murmured something about not having noticed that he had it.

“What an odd-looking youth!” said my companion, who had watched me, as I seated myself beside her.

“Yes, he is odd-looking; but what is odder still is that I have seen him before, that his face is familiar to me, and yet that I can’t place him.”  The orchestra was playing the Prayer from Der Freischütz, but Weber’s lovely music only deepened the blank of memory.  Who the deuce was he? where, when, how, had I known him?  It seemed extraordinary that a face should be at once so familiar and so strange.  We had our backs turned to him, so that I could not look at him again.  When the music ceased we left our places, and I went to consign my friend to her mamma on the terrace.  In passing, I saw that my young man had departed; I concluded that he only strikingly resembled some one I knew.  But who in the world was it he resembled?  The ladies went off to their lodgings, which were near by, and I turned into the gaming-rooms and hovered about the circle at roulette.  Gradually I filtered through to the inner edge, near the table, and, looking round, saw my puzzling friend stationed opposite to me.  He was watching the game, with his hands in his pockets; but singularly enough, now that I observed him at my leisure, the look of familiarity quite faded from his face.  What had made us call his appearance odd was his great length and leanness of limb, his long, white neck, his blue, prominent eyes, and his ingenuous, unconscious absorption in the scene before him.  He was not handsome, certainly, but he looked peculiarly amiable and if his overt wonderment savoured a trifle of rurality, it was an agreeable contrast to the hard, inexpressive masks about him.  He was the verdant offshoot, I said to myself, of some ancient, rigid stem; he had been brought up in the quietest of homes, and he was having his first glimpse of life.  I was curious to see whether he would put anything on the table; he evidently felt the temptation, but he seemed paralysed by chronic embarrassment.  He stood gazing at the chinking complexity of losses and gains, shaking his loose gold in his pocket, and every now and then passing his hand nervously over his eyes....