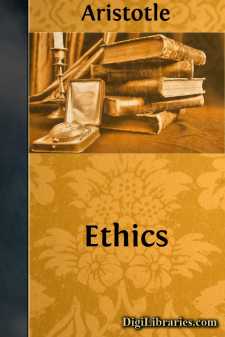 The Ethics of Aristotle is one half of a single treatise of which his Politics is the other half. Both deal with one and the same subject. This subject is what Aristotle calls in one place the "philosophy of human affairs;" but more frequently Political or Social Science. In the two works taken together we have their author's whole theory of human conduct or practical activity, that is, of all human activity which is not directed merely to knowledge or truth. The two parts of this treatise are mutually complementary, but in a literary sense each is independent and self-contained. The proem to the Ethics is an introduction to the whole subject, not merely to the first part; the last chapter of the Ethics points forward to the Politics, and sketches for that part of the treatise the order of enquiry to be pursued (an order which in the actual treatise is not adhered to).

The principle of distribution of the subject-matter between the two works is far from obvious, and has been much debated. Not much can be gathered from their titles, which in any case were not given to them by their author. Nor do these titles suggest any very compact unity in the works to which they are applied: the plural forms, which survive so oddly in English (Ethic_s_, Politic_s_), were intended to indicate the treatment within a single work of a group of connected questions. The unity of the first group arises from their centring round the topic of character, that of the second from their connection with the existence and life of the city or state. We have thus to regard the Ethics as dealing with one group of problems and the Politics with a second, both falling within the wide compass of Political Science. Each of these groups falls into sub-groups which roughly correspond to the several books in each work. The tendency to take up one by one the various problems which had suggested themselves in the wide field obscures both the unity of the subject-matter and its proper articulation. But it is to be remembered that what is offered us is avowedly rather an enquiry than an exposition of hard and fast doctrine.

Nevertheless each work aims at a relative completeness, and it is important to observe the relation of each to the other. The distinction is not that the one treats of Moral and the other of Political Philosophy, nor again that the one deals with the moral activity of the individual and the other with that of the State, nor once more that the one gives us the theory of human conduct, while the other discusses its application in practice, though not all of these misinterpretations are equally erroneous. The clue to the right interpretation is given by Aristotle himself, where in the last chapter of the Ethics he is paving the way for the Politics. In the Ethics he has not confined himself to the abstract or isolated individual, but has always thought of him, or we might say, in his social and political context, with a given nature due to race and heredity and in certain surroundings....