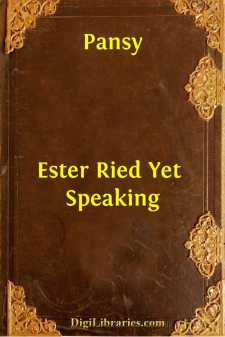 CHAPTER I. "IT MAY BE THAT SHE IS WORKING STILL."

It was raining drearily, and but few people were abroad—that is, few, comparatively speaking, though the streets seemed full of hurrying, dripping mortals. In the large dry-goods store business was by no means so brisk as on sunny days, and one of the younger clerks, whose station was near a window looking out upon the thoroughfare, had time to stand gazing at the passers-by. They did not seem to interest him particularly, or else they puzzled him. His young, handsome face wore a thoughtful look, almost a troubled expression about the eyes, which seemed to be gazing beyond the passers-by. Just across the aisle from him, a lady, seated in one of the easy chairs set for the accommodation of shoppers, waited and watched him,—a young and pretty woman, tastefully, even elegantly dressed, yet her costume was quite in keeping with the stormy day. The young man's face seemed to have special interest for her, though he apparently was unaware of her existence. A close observer would have discovered that she was watching him with deeply interested eyes. Whatever served to hold the thoughts of the young man apparently grew in perplexity, for the troubled look continually deepened. At last, forgetting the possible listener, he addressed the dripping clouds, perhaps,—at least, he was looking at them:—

"I don't know how to do it; but something ought to be done. It is worse than folly to expect good from the way that things are now managed. Ester would have known just what, and how; and how interested she would have been! I try to do her work, and to 'redeem the time;' but the simple truth is, I don't know how, and nobody else seems to."

These sentences were not given all at once, but murmured from time to time at his unsympathetic audience outside.

With the listener inside it was different. The interested look changed to an eager one. She left her seat and moved toward the absorbed young man, breaking in on his reverie with the clearest of voices:—

"I beg your pardon,—but are you thinking of your sister? You are Mr. Ried, I believe? I have heard of your sister's life, and of her beautiful death, through a dear friend of my husband, who loved Ester. I have always wanted to know more about her. I wanted to get acquainted with you, so I might ask you things about her. I am waiting now for my husband to come and introduce us. But perhaps it isn't necessary. Do you know who I am?"

"It is Mrs. Roberts, I believe?" the young man said, struggling with his astonishment and embarrassment.

"Yes, and you are Mr. Alfred Ried. Well, now we know each other without any further ceremony. Will you tell me a little about your sister, Mr. Ried? You were thinking of her just now."

"I was missing her just now," said he, trying to smile, "as I very often am. I was a little fellow when she died; but the older I grow the more difficult I find it to see how the world can spare her....