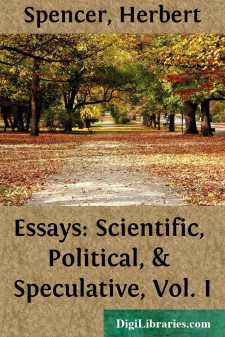 In a debate upon the development hypothesis, lately narrated to me by a friend, one of the disputants was described as arguing that as, in all our experience, we know no such phenomenon as transmutation of species, it is unphilosophical to assume that transmutation of species ever takes place. Had I been present I think that, passing over his assertion, which is open to criticism, I should have replied that, as in all our experience we have never known a species created, it was, by his own showing, unphilosophical to assume that any species ever had been created.

Those who cavalierly reject the Theory of Evolution as not being adequately supported by facts, seem to forget that their own theory is supported by no facts at all. Like the majority of men who are born to a given belief, they demand the most rigorous proof of any adverse belief, but assume that their own needs none. Here we find, scattered over the globe, vegetable and animal organisms numbering, of the one kind (according to Humboldt), some 320,000 species, and of the other, some 2,000,000 species (see Carpenter); and if to these we add the numbers of animal and vegetable species which have become extinct, we may safely estimate the number of species that have existed, and are existing, on the Earth, at not less than ten millions. Well, which is the most rational theory about these ten millions of species? Is it most likely that there have been ten millions of special creations? or is it most likely that, by continual modifications due to change of circumstances, ten millions of varieties have been produced, as varieties are being produced still?

Doubtless many will reply that they can more easily conceive ten millions of special creations to have taken place, than they can conceive that ten millions of varieties have arisen by successive modifications. All such, however, will find, on inquiry, that they are under an illusion. This is one of the many cases in which men do not really believe, but rather believe they believe. It is not that they can truly conceive ten millions of special creations to have taken place, but that they think they can do so. Careful introspection will show them that they have never yet realized to themselves the creation of even one species. If they have formed a definite conception of the process, let them tell us how a new species is constructed, and how it makes its appearance. Is it thrown down from the clouds? or must we hold to the notion that it struggles up out of the ground? Do its limbs and viscera rush together from all the points of the compass? or must we receive the old Hebrew idea, that God takes clay and moulds a new creature? If they say that a new creature is produced in none of these modes, which are too absurd to be believed, then they are required to describe the mode in which a new creature may be produced—a mode which does not seem absurd; and such a mode they will find that they neither have conceived nor can conceive.

Should the believers in special creations consider it unfair thus to call upon them to describe how special creations take place, I reply that this is far less than they demand from the supporters of the Development Hypothesis. They are merely asked to point out a conceivable mode. On the other hand, they ask, not simply for a conceivable mode, but for the actual mode. They do not say—Show us how this may take place; but they say—Show us how this does take place. So far from its being unreasonable to put the above question, it would be reasonable to ask not only for a possible mode of special creation, but for an ascertained mode; seeing that this is no greater a demand than they make upon their opponents.

And here we may perceive how much more defensible the new doctrine is than the old one. Even could the supporters of the Development Hypothesis merely show that the origination of species by the process of modification is conceivable, they would be in a better position than their opponents. But they can do much more than this. They can show that the process of modification has effected, and is effecting, decided changes in all organisms subject to modifying influences....