Essays on Work and Culture 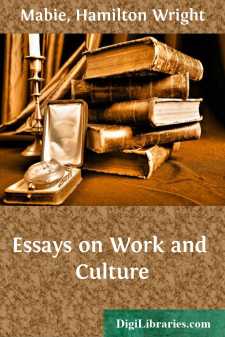 A complete man is so uncommon that when he appears he is looked upon with suspicion, as if there must be something wrong about him. If a man is content to deal vigorously with affairs, and leave art, religion, and science to the enjoyment or refreshment or enlightenment of others, he is accepted as strong, sounds and wise; but let him add to practical sagacity a love of poetry and some skill in the practice of it; let him be not only honest and trustworthy, but genuinely religious; let him be not only keenly observant and exact in his estimate of trade influences and movements, but devoted to the study of some science, and there goes abroad the impression that he is superficial. It is written, apparently, in the modern, and especially in the American, consciousness, that a man can do but one thing well; if he attempts more than one thing, he betrays the weakness of versatility. If this view of life is sound, man is born to imperfect development and must not struggle with fate. He may have natural aptitudes of many kinds; he may have a passionate desire to try three or four different instruments; he may have a force of vitality which is equal to the demands of several vocations or avocations; but he must disregard the most powerful impulses of his nature; he must select one tool, and with that tool he must do all the work appointed to him.

If he is a man of business, he must turn a deaf ear to the voices of art; if he writes prose, he must not permit himself the delight of writing verse; if he uses the pen, he must not use the voice. If he ventures to employ two languages for his thought, to pour his energy into two channels, the awful judgment of superficiality falls on him like a decree of fate.

So fixed has become the habit of confusing the use of manifold gifts with mere dexterity that men of quality and power often question the promptings which impel them to use different or diverse forms of expression; as if a man were born to use only one limb and enjoy only one resource in this many-sided universe!

Specialisation has been carried so far that it has become an organised tyranny through the curiously perverted view of life which it has developed in some minds. A man is permitted, in these days, to cultivate one faculty or master one field of knowledge, but he must not try to live a whole life, or work his nature out on all sides, under penalty of public suspicion and disapproval. If a Pericles were to appear among us, he would be discredited by the very qualities which made him the foremost public man of his time among the most intelligent and gifted people who have yet striven to solve the problems of life. If Michelangelo came among us, he would be compelled to repress his tremendous energy or face the suspicion of the critical mind of the age; it is not permitted a man, in these days, to excel in painting, sculpture, architecture, and sonnet-writing. If, in addition, such a man were to exhibit moral qualities of a very unusual order, he would deepen the suspicion that he was not playing the game of life fairly; for there are those who have so completely broken life into fragments that they not only deny the possibility of the possession of the ability to do more than one thing well, but the existence of any kind of connection between character and achievement....