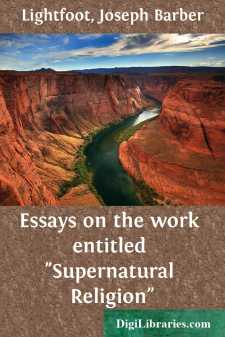 If the author of Supernatural Religion [Footnote 1:1] designed, by withholding his name, to stimulate public curiosity and thus to extend the circulation of his work, he has certainly not been disappointed in his hope. When the rumour once got abroad, that it proceeded from the pen of a learned and venerable prelate, the success of the book was secured. For this rumour indeed there was no foundation in fact. It was promptly and emphatically denied, when accidentally it reached the ears of the supposed author. But meanwhile the report had been efficacious. The reviewers had taken the work in hand and (with one exception) lavished their praises on the critical portions of it. The first edition was exhausted in a few months.

No words can be too strong to condemn the heartless cruelty of this imputation. The venerable prelate, on whom the authorship of this anonymous work was thrust, deserved least of all men to be exposed to such an insult. As an academic teacher and as an ecclesiastical ruler alike, he had distinguished himself by a courageous avowal of his opinions at all costs. For more than a quarter of a century he had lived in the full blaze of publicity, and on his fearless integrity no breath of suspicion had ever rested. Yet now, when increasing infirmities obliged him to lay down his office, he was told that his life for years past had been one gigantic lie. The insinuation involved nothing less than this. Throughout those many years, during which the anonymous author, as he himself tells us, had been preparing for the publication of an elaborate and systematic attack upon Christianity, the bishop was preaching Christian doctrine, confirming Christian children, ordaining Christian ministers, without breathing a hint to the world that he felt any misgiving of the truths which he thus avowed and taught. Yet men talked as if, somehow or other, the cause of 'freethinking' had gained great moral support from the conversion of a bishop, though, if the rumour had been true, their new convert had for years past been guilty of the basest fraud of which a man is capable.

And all the while there was absolutely nothing to recommend this identification of the unknown author. The intellectual characteristics of the work present a trenchant contrast to the refined scholarship and cautious logic of this accomplished prelate. Only one point of resemblance could be named. The author shows an acquaintance with the theological critics of the modern Dutch school; and a knowledge of Dutch writers was known, or believed, to have a place among the acquisitions of this omniscient scholar. Truly no reputation is safe, when such a reputation is traduced on these grounds.

I have been assuming however that the work entitled Supernatural Religion, which lies before me, is the same work which the reviewers have applauded under this name. But, when I remember that the St Mark of Papias cannot possibly be our St Mark, I feel bound to throw upon this assumption the full light of modern critical principles; and, so tested, it proves to be not only hasty and unwarrantable, but altogether absurd....