Essays on some unsettled Questions of Political Economy 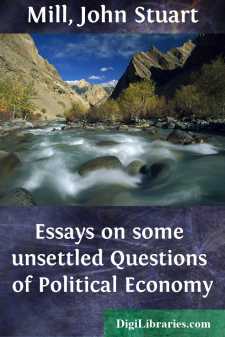 ESSAY I. OF THE LAWS OF INTERCHANGE BETWEEN NATIONS; AND THE DISTRIBUTION OF THE GAINS OF COMMERCE AMONG THE COUNTRIES OF THE COMMERCIAL WORLD.

Of the truths with which political economy has been enriched by Mr. Ricardo, none has contributed more to give to that branch of knowledge the comparatively precise and scientific character which it at present bears, than the more accurate analysis which he performed of the nature of the advantage which nations derive from a mutual interchange of their productions. Previously to his time, the benefits of foreign trade were deemed, even by the most philosophical enquirers, to consist in affording a vent for surplus produce, or in enabling a portion of the national capital to replace itself with a profit. The futility of the theory implied in these and similar phrases, was an obvious consequence from the speculations of writers even anterior to Mr. Ricardo. But it was he who first, in the chapter on Foreign Trade, of his immortal Principles of Political Economy and Taxation, substituted for the former vague and unscientific, if not positively false, conceptions with regard to the advantage of trade, a philosophical exposition which explains, with strict precision, the nature of that advantage, and affords an accurate measure of its amount.

He shewed, that the advantage of an interchange of commodities between nations consists simply and solely in this, that it enables each to obtain, with a given amount of labour and capital, a greater quantity of all commodities taken together. This it accomplishes by enabling each, with a quantity of one commodity which has cost it so much labour and capital, to purchase a quantity of another commodity which, if produced at home, would have required labour and capital to a greater amount. To render the importation of an article more advantageous than its production, it is not necessary that the foreign country should be able to produce it with less labour and capital than ourselves. We may even have a positive advantage in its production: but, if we are so far favoured by circumstances as to have a still greater positive advantage in the production of some other article which is in demand in the foreign country, we may be able to obtain a greater return to our labour and capital by employing none of it in producing the article in which our advantage is least, but devoting it all to the production of that in which our advantage is greatest, and giving this to the foreign country in exchange for the other. It is not a difference in the absolute cost of production, which determines the interchange, but a difference in the comparative cost. It may be to our advantage to procure iron from Sweden in exchange for cottons, even although the mines of England as well as her manufactories should be more productive than those of Sweden; for if we have an advantage of one-half in cottons, and only an advantage of a quarter in iron, and could sell our cottons to Sweden at the price which Sweden must pay for them if she produced them herself, we should obtain our iron with an advantage of one-half, as well as our cottons....