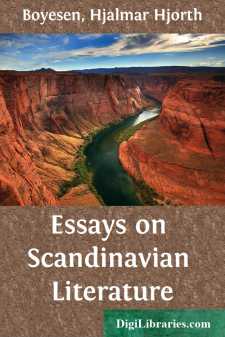 Björnstjerne Björnson is the first Norwegian poet who can in any sense be called national. The national genius, with its limitations as well as its virtues, has found its living embodiment in him. Whenever he opens his mouth it is as if the nation itself were speaking. If he writes a little song, hardly a year elapses before its phrases have passed into the common speech of the people; composers compete for the honor of interpreting it in simple, Norse-sounding melodies, which gradually work their way from the drawing-room to the kitchen, the street, and thence out over the wide fields and highlands of Norway. His tales, romances, and dramas express collectively the supreme result of the nation's experience, so that no one to-day can view Norwegian life or Norwegian history except through their medium. The bitterest opponent of the poet (for like every strong personality he has many enemies) is thus no less his debtor than his warmest admirer. His speech has stamped itself upon the very language and given it a new ring, a deeper resonance. His thought fills the air, and has become the unconscious property of all who have grown to manhood and womanhood since the day when his titanic form first loomed up on the horizon of the North. It is not only as their first and greatest poet that the Norsemen love and hate him, but also as a civilizer in the widest sense. But like Kadmus, in Greek myth, he has not only brought with him letters, but also the dragon-teeth of strife, which it is to be hoped will not sprout forth in armed men.

A man's ancestry and environment, no doubt, account in a superficial manner for his appearance and mental characteristics. Having the man, we are able to trace the germs of his being in the past of his race and his country; but, with all our science we have not yet acquired the ingenuity to predict the man—to deduce him a priori from the tangle of determining causes which enveloped his birth. It seems beautifully appropriate in the Elder Edda that the god-descended hero Helge the Völsung should be born amid gloom and terror in a storm which shakes the house, while the Norns—the goddesses of fate—proclaim in the tempest his tempestuous career. Equally satisfactory it appears to have the modern champion of Norway—the typical modern Norseman—born on the bleak and wild Dovre Mountain, where there is winter eight months of the year and cold weather during the remaining four. The parish of Kvikne, in Oesterdalen, where his father, the Reverend Peder Björnson, held a living, had a bad reputation on account of the unruly ferocity and brutal violence of the inhabitants. One of the Reverend Peder Björnson's recent predecessors never went into his pulpit, unarmed; and another fled for his life. The peasants were not slow in intimating to the new pastor that they meant to have him mind his own business and conform to the manners and customs of the parish; but there they reckoned without their host. The reverend gentleman made short work of the opposition....