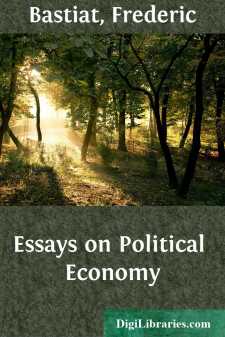 My object in this treatise is to examine into the real nature of the Interest of Capital, for the purpose of proving that it is lawful, and explaining why it should be perpetual. This may appear singular, and yet, I confess, I am more afraid of being too plain than too obscure. I am afraid I may weary the reader by a series of mere truisms. But it is no easy matter to avoid this danger, when the facts with which we have to deal are known to every one by personal, familiar, and daily experience.

But, then, you will say, "What is the use of this treatise? Why explain what everybody knows?"

But, although this problem appears at first sight so very simple, there is more in it than you might suppose. I shall endeavour to prove this by an example. Mondor lends an instrument of labour to-day, which will be entirely destroyed in a week, yet the capital will not produce the less interest to Mondor or his heirs, through all eternity. Reader, can you honestly say that you understand the reason of this?

It would be a waste of time to seek any satisfactory explanation from the writings of economists. They have not thrown much light upon the reasons of the existence of interest. For this they are not to be blamed; for at the time they wrote, its lawfulness was not called in question. Now, however, times are altered; the case is different. Men, who consider themselves to be in advance of their age, have organised an active crusade against capital and interest; it is the productiveness of capital which they are attacking; not certain abuses in the administration of it, but the principle itself.

A journal has been established to serve as a vehicle for this crusade. It is conducted by M. Proudhon, and has, it is said, an immense circulation. The first number of this periodical contains the electoral manifesto of the people. Here we read, "The productiveness of capital, which is condemned by Christianity under the name of usury, is the true cause of misery, the true principle of destitution, the eternal obstacle to the establishment of the Republic."

Another journal, La Ruche Populaire, after having said some excellent things on labour, adds, "But, above all, labour ought to be free; that is, it ought to be organised in such a manner, that money-lenders and patrons, or masters, should not be paid for this liberty of labour, this right of labour, which is raised to so high a price by the traffickers of men." The only thought that I notice here, is that expressed by the words in italics, which imply a denial of the right to interest. The remainder of the article explains it.

It is thus that the democratic Socialist, Thoré expresses himself:--

"The revolution will always have to be recommenced, so long as we occupy ourselves with consequences only, without having the logic or the courage to attack the principle itself. This principle is capital, false property, interest, and usury, which by the old régime, is made to weigh upon labour.

"Ever since the aristocrats invented the incredible fiction, that capital possesses the power of reproducing itself, the workers have been at the mercy of the idle....