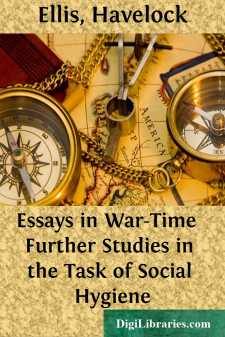 From the point of view of literature, the Great War of to-day has brought us into a new and closer sympathy with the England of the past. Dr. Woods and Mr. Baltzly in their recent careful study of European Warfare, Is War Diminishing? come to the conclusion that England during the period of her great activity in the world has been "fighting about half the time." We had begun to look on war as belonging to the past and insensibly fallen into the view of Buckle that in England "a love of war is, as a national taste, utterly extinct." Now we have awakened to realise that we belong to a people who have been "fighting about half the time."

Thus it is, for instance, that we witness a revival of interest in Wordsworth, not that Wordsworth, the high-priest of Nature among the solitary Lakes, whom we have never forsaken, but the Wordsworth who sang exultantly of Carnage as God's Daughter. To-day we turn to the war-like Wordsworth, the stern patriot hurling defiance at the enemies who threatened our island fortress, as the authentic voice of England.

But this new sense of community with the past comes to us again and again on every hand when to-day we look back to the records of the past. I chance to take down the Epistles of Erasmus, and turn to the letters which the great Humanist of Rotterdam wrote from Cambridge and London four hundred years ago when young Henry VIII had just suddenly (in 1514) plunged into war. One reads them to-day with vivid interest, for here in the supple and sensitive brain of the old scholar we see mirrored precisely the same thoughts and the same problems which exercise the more scholarly brains of to-day. Erasmus, as his Pan-German friends liked to remind him, was a sort of German, but he was, nevertheless, what we should now call a Pacifist. He can see nothing good in war and he eloquently sets forth what he regards as its evils. It is interesting to observe, how, even in its small details as well as in its great calamities, war brought precisely the same experiences four centuries ago as to-day. Prices are rising every day, Erasmus declares, taxation has become so heavy that no one can afford to be liberal, imports are hampered and wine is scarce, it is difficult even to get one's foreign letters. In fact the preparations of war are rapidly changing "the genius of the Island." Thereupon Erasmus launches into more general considerations on war. Even animals, he points out, do not fight, save rarely, and then with only those of other species, and, moreover, not, like us, "with machines upon which we expend the ingenuity of devils." In every war also it is the non-combatants who suffer most, the people build cities and the folly of their rulers destroys them, the most righteous, the most victorious war brings more evil than good, and even when a real issue is in dispute, it could better have been settled by arbitration. The moral contagion of a war, moreover, lasts long after the war is over, and Erasmus proceeds to express himself freely on the crimes of fighters and fighting....