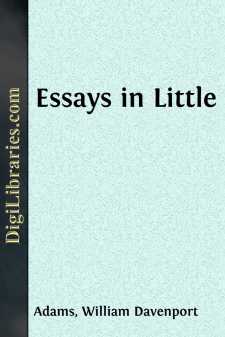 Alexandre Dumas is a writer, and his life is a topic, of which his devotees never weary.  Indeed, one lifetime is not long enough wherein to tire of them.  The long days and years of Hilpa and Shalum, in Addison—the antediluvian age, when a picnic lasted for half a century and a courtship for two hundred years, might have sufficed for an exhaustive study of Dumas.  No such study have I to offer, in the brief seasons of our perishable days.  I own that I have not read, and do not, in the circumstances, expect to read, all of Dumas, nor even the greater part of his thousand volumes.  We only dip a cup in that sparkling spring, and drink, and go on,—we cannot hope to exhaust the fountain, nor to carry away with us the well itself.  It is but a word of gratitude and delight that we can say to the heroic and indomitable master, only an ave of friendship that we can call across the bourne to the shade of the Porthos of fiction.  That his works (his best works) should be even still more widely circulated than they are; that the young should read them, and learn frankness, kindness, generosity—should esteem the tender heart, and the gay, invincible wit; that the old should read them again, and find forgetfulness of trouble, and taste the anodyne of dreams, that is what we desire.

Dumas said of himself (“Mémoires,” v. 13) that when he was young he tried several times to read forbidden books—books that are sold sous le manteau.  But he never got farther than the tenth page, in the

he never made his way so far as

“I had, thank God, a natural sentiment of delicacy; and thus, out of my six hundred volumes (in 1852) there are not four which the most scrupulous mother may not give to her daughter.”  Much later, in 1864, when the Censure threatened one of his plays, he wrote to the Emperor: “Of my twelve hundred volumes there is not one which a girl in our most modest quarter, the Faubourg Saint-Germain, may not be allowed to read.”  The mothers of the Faubourg, and mothers in general, may not take Dumas exactly at his word.  There is a passage, for example, in the story of Miladi (“Les Trois Mousquetaires”) which a parent or guardian may well think undesirable reading for youth.  But compare it with the original passage in the “Mémoires” of D’Artagnan!  It has passed through a medium, as Dumas himself declared, of natural delicacy and good taste.  His enormous popularity, the widest in the world of letters, owes absolutely nothing to prurience or curiosity.  The air which he breathes is a healthy air, is the open air; and that by his own choice, for he had every temptation to seek another kind of vogue, and every opportunity.

Two anecdotes are told of Dumas’ books, one by M. Edmond About, the other by his own son, which show, in brief space, why this novelist is so beloved, and why he deserves our affection and esteem.  M....