Essays from 'The Guardian' 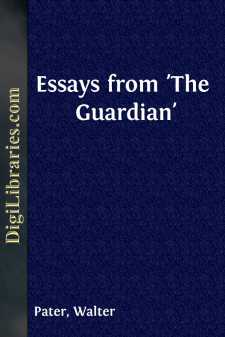 [3] THE making of an anthology of English prose is what must have occurred to many of its students, by way of pleasure to themselves, or of profit to other persons. Such an anthology, the compass and variety of our prose literature being considered, might well follow exclusively some special line of interest in it; exhibiting, for instance, what is so obviously striking, its imaginative power, or its (legitimately) poetic beauty, or again, its philosophical capacity. Mr. Saintsbury's well-considered Specimens of English Prose Style, from Malory to Macaulay (Kegan Paul), a volume, as we think, which bears fresh witness to the truth of the old remark that it takes a scholar indeed to make a [4] good literary selection, has its motive sufficiently indicated in the very original "introductory essay," which might well stand, along with the best of these extracts from a hundred or more deceased masters of English, as itself a document or standard, in the matter of prose style. The essential difference between poetry and prose—"that other beauty of prose"—in the words of the motto he has chosen from Dryden, the first master of the sort of prose he prefers:—that is Mr. Saintsbury's burden. It is a consideration, undoubtedly, of great importance both for the writer and the critic; in England especially, where, although (as Mr. Saintsbury rightly points out, in correction of an imperfectly informed French critic of our literature) the radical distinction between poetry and prose has ever been recognized by its students, yet the imaginative impulse, which is perhaps the richest of our purely intellectual gifts, has been apt to invade the province of that tact and good judgment, alike as to matter and manner, in which we are not richer than other people. Great poetry and great prose, it might be found, have most of their qualities in common. But [5] their indispensable qualities are different, or even opposed; and it is just the indispensable qualities of prose and poetry respectively, which it is so necessary for those who have to do with either to bear ever in mind. Order, precision, directness, are the radical merits of prose thought; and it is more than merely legitimate that they should form the criterion of prose style, because within the scope of those qualities, according to Mr. Saintsbury, there is more than just the quiet, unpretending usefulness of the bare sermo pedestris. Acting on language, those qualities generate a specific and unique beauty—"that other beauty of prose"—fitly illustrated by these specimens, which the reader needs hardly be told, after what has been now said, are far from being a collection of "purple patches."

Whether or not he admits their practical cogency, an attentive reader will not fail to be interested in the attempt Mr. Saintsbury has made to give technical rules of metre for the production of the true prose rhythm. Any one who cares to do so might test the validity of those rules in the nearest possible way, by applying them to the varied examples in this wide [6] survey of what has been actually well done in English prose, here exhibited on the side of their strictly prosaic merit—their conformity, before all other aims, to laws of a structure primarily reasonable. Not that that reasonable prose structure, or architecture, as Mr. Saintsbury conceives it, has been always, or even generally, the ideal, even of those chosen writers here in evidence. Elizabethan prose, all too chaotic in the beauty and force which overflowed into it from Elizabethan poetry, and incorrect with an incorrectness which leaves it scarcely legitimate prose at all: then, in reaction against that, the correctness of Dryden, and his followers through the eighteenth century, determining the standard of a prose in the proper sense, not inferior to the prose of the Augustan age in Latin, or of the "great age in France": and, again in reaction against this, the wild mixture of poetry and prose, in our wild nineteenth century, under the influence of such writers as Dickens and Carlyle: such are the three periods into which the story of our prose literature divides itself. And Mr. Saintsbury has his well-timed, practical suggestions, upon a survey of them.

[7] If the invasion of the legitimate sphere of prose in England by the spirit of poetry, weaker or stronger, has been something far deeper than is indicated by that tendency to write unconscious blank verse, which has made it feasible to transcribe about one-half of Dickens's otherwise so admirable Barnaby Rudge in blank-verse lines, a tendency (outdoing our old friend M. Jourdain) commoner than Mr. Saintsbury admits, such lines being frequent in his favourite Dryden; yet, on the other hand, it might be maintained, and would be maintained by its French critics, that our English poetry has been too apt to dispense with those prose qualities, which, though not the indispensable qualities of poetry, go, nevertheless, to the making of all first-rate poetry—the qualities, namely, of orderly structure, and such qualities generally as depend upon second thoughts. A collection of specimens of English poetry, for the purpose of exhibiting the achievement of prose excellences by it (in their legitimate measure) is a desideratum we commend to Mr. Saintsbury. It is the assertion, the development, the product of those very different indispensable qualities of poetry, in the presence [8] of which the English is equal or superior to all other modern literature—the native, sublime, and beautiful, but often wild and irregular, imaginative power in English poetry from Chaucer to Shakespeare, with which Professor Minto deals, in his Characteristics of English Poets (Blackwood), lately reprinted....