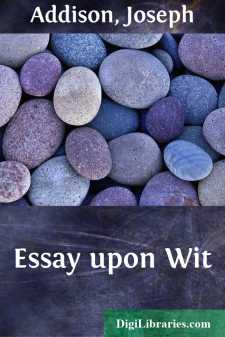 AN ESSAY UPON WIT.

The Inclinations of Men, in this their degenerate State, carry them with great Force to those voluptuous Objects, that please their Appetites and gratify their Senses; and which not only by their early Acquaintance and Familiarity, but as they are adapted to the prevailing Instincts of Nature, are more esteem'd and pursu'd than all other Satisfactions. As those inferior Enjoyments, that only affect the Organs of the Body are chiefly coveted, so next to these, that light and facetious Qualification of the Mind, that diverts the Hearers and is proper to produce Mirth and Alacrity, has, in all Ages, by the greatest Part of Mankind, been admir'd and applauded. No Productions of Human Understanding are receiv'd with such a general Pleasure and Approbation, as those that abound with Wit and Humour, on which the People set a greater Value, than on the wisest and most instructive Discourses. Hence a pleasant Man is always caress'd above a wise one, and Ridicule and Satyr, that entertain the Laughers, often put solid Reason and useful Science out of Countenance. The wanton Temper of the Nation has been gratify'd so long with the high Seasonings of Wit and Raillery in Writing and Conversation, that now almost all Things that are not accommodated to their Relish by a strong Infusion of those Ingredients, are rejected as the heavy and insipid Performances of Men of a plain Understanding and meer Masters of Sense.

Since the Power of Wit is so prevalent, and has obtained such Esteem and Popularity, that a Man endow'd with this agreeable Quality, is by many look'd on as a Heavenly Being, if compar'd with others, who have nothing but Learning and a clear arguing Head; it will be worth the while to search into its Nature, and examine its Usefulness, and take a View of those fatal Effects which it produces, when it happens to be misapply'd.

Tho perhaps the Talent which we call Wit, like that of Humour, is as clearly understood by its simple Term, as by the most labour'd Description; an Argument or which is this, That many ingenious Persons, by their unsuccessful Essays to explain it, have rather obscur'd than illustrated its Idea; I will notwithstanding adventure to give the Definition of it, which tho it may fall short of Perfection, yet I imagine, will come nearer to it, than any that has yet appear'd. Wit is a Qualification of the Mind, that raises and enlivens cold Sentiments and plain Propositions, by giving them an elegant and surprizing Turn.

It is evident, that Wit cannot essentially consist in the Justness and Propriety of the Thoughts, that is, the Conformity of our Conceptions to the Objects we conceive; for this is the Definition of Truth, when taken in a Physical Sense; nor in the Purity of Words and Expression, for this may be eminent in the Cold, Didactick Stile, and in the correct Writers of History and Philosophy: But Wit is that which imparts Spirit to our Conceptions and Diction, by giving them a lively and novel, and therefore an agreeable Form: And thus its Nature is limited and diversify'd from all other intellectual Endowments....