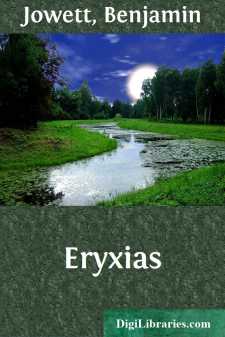 The two dialogues which are translated in the second appendix are not mentioned by Aristotle, or by any early authority, and have no claim to be ascribed to Plato. They are examples of Platonic dialogues to be assigned probably to the second or third generation after Plato, when his writings were well known at Athens and Alexandria. They exhibit considerable originality, and are remarkable for containing several thoughts of the sort which we suppose to be modern rather than ancient, and which therefore have a peculiar interest for us. The Second Alcibiades shows that the difficulties about prayer which have perplexed Christian theologians were not unknown among the followers of Plato. The Eryxias was doubted by the ancients themselves: yet it may claim the distinction of being, among all Greek or Roman writings, the one which anticipates in the most striking manner the modern science of political economy and gives an abstract form to some of its principal doctrines.

For the translation of these two dialogues I am indebted to my friend and secretary, Mr. Knight.

That the Dialogue which goes by the name of the Second Alcibiades is a genuine writing of Plato will not be maintained by any modern critic, and was hardly believed by the ancients themselves. The dialectic is poor and weak. There is no power over language, or beauty of style; and there is a certain abruptness and agroikia in the conversation, which is very un-Platonic. The best passage is probably that about the poets:—the remark that the poet, who is of a reserved disposition, is uncommonly difficult to understand, and the ridiculous interpretation of Homer, are entirely in the spirit of Plato (compare Protag; Ion; Apol.). The characters are ill-drawn. Socrates assumes the 'superior person' and preaches too much, while Alcibiades is stupid and heavy-in-hand. There are traces of Stoic influence in the general tone and phraseology of the Dialogue (compare opos melesei tis...kaka: oti pas aphron mainetai): and the writer seems to have been acquainted with the 'Laws' of Plato (compare Laws). An incident from the Symposium is rather clumsily introduced, and two somewhat hackneyed quotations (Symp., Gorg.) recur. The reference to the death of Archelaus as having occurred 'quite lately' is only a fiction, probably suggested by the Gorgias, where the story of Archelaus is told, and a similar phrase occurs;—ta gar echthes kai proen gegonota tauta, k.t.l. There are several passages which are either corrupt or extremely ill-expressed. But there is a modern interest in the subject of the dialogue; and it is a good example of a short spurious work, which may be attributed to the second or third century before Christ.

Much cannot be said in praise of the style or conception of the Eryxias. It is frequently obscure; like the exercise of a student, it is full of small imitations of Plato:—Phaeax returning from an expedition to Sicily (compare Socrates in the Charmides from the army at Potidaea), the figure of the game at draughts, borrowed from the Republic, etc....