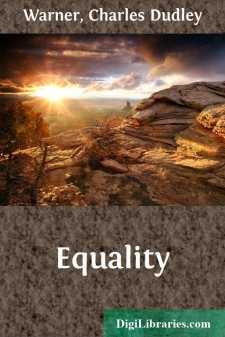 In accordance with the advice of Diogenes of Apollonia in the beginning of his treatise on Natural Philosophy—"It appears to me to be well for every one who commences any sort of philosophical treatise to lay down some undeniable principle to start with"—we offer this:

All men are created unequal.

It would be a most interesting study to trace the growth in the world of the doctrine of "equality." That is not the purpose of this essay, any further than is necessary for definition. We use the term in its popular sense, in the meaning, somewhat vague, it is true, which it has had since the middle of the eighteenth century. In the popular apprehension it is apt to be confounded with uniformity; and this not without reason, since in many applications of the theory the tendency is to produce likeness or uniformity. Nature, with equal laws, tends always to diversity; and doubtless the just notion of equality in human affairs consists with unlikeness. Our purpose is to note some of the tendencies of the dogma as it is at present understood by a considerable portion of mankind.

We regard the formulated doctrine as modern. It would be too much to say that some notion of the "equality of men" did not underlie the socialistic and communistic ideas which prevailed from time to time in the ancient world, and broke out with volcanic violence in the Grecian and Roman communities. But those popular movements seem to us rather blind struggles against physical evils, and to be distinguished from those more intelligent actions based upon the theory which began to stir Europe prior to the Reformation.

It is sufficient for our purpose to take the well-defined theory of modern times. Whether the ideal republic of Plato was merely a convenient form for philosophical speculation, or whether, as the greatest authority on political economy in Germany, Dr. William Roscher, thinks, it "was no mere fancy"; whether Plato's notion of the identity of man and the State is compatible with the theory of equality, or whether it is, as many communists say, indispensable to it, we need not here discuss. It is true that in his Republic almost all the social theories which have been deduced from the modern proclamation of equality are elaborated. There was to be a community of property, and also a community of wives and children. The equality of the sexes was insisted on to the extent of living in common, identical education and pursuits, equal share in all labors, in occupations, and in government. Between the sexes there was allowed only one ultimate difference. The Greeks, as Professor Jowett says, had noble conceptions of womanhood; but Plato's ideal for the sexes had no counterpart in their actual life, nor could they have understood the sort of equality upon which he insisted. The same is true of the Romans throughout their history.

More than any other Oriental peoples the Egyptians of the Ancient Empire entertained the idea of the equality of the sexes; but the equality of man was not conceived by them. Still less did any notion of it exist in the Jewish state. It was the fashion with the socialists of 1793, as it has been with the international assemblages at Geneva in our own day, to trace the genesis of their notions back to the first Christian age....